Uber Eats added delivery capabilities to nearly two-thirds of McDonald's locations nationwide, but that convenience came with a high price. McDonald's charges an extra $1.99 per delivery along with other extra fees (like charges for small orders). Uber then charges customers and McDonald's franchisees' additional fees, and -- in some cases -- all those charges can more than double the price of a meal. 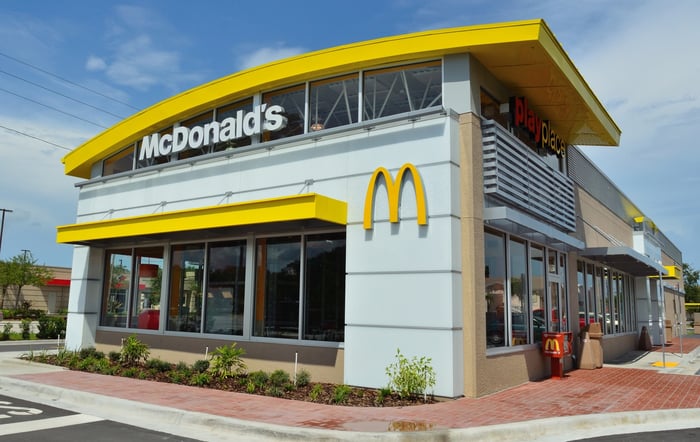 Meanwhile, Uber's exclusive deal with McDonald's prevented other competitors -- like DoorDash and Grubhub (NYSE:GRUB) -- from offering better rates. That's why it wasn't surprising when McDonald's ended its exclusivity with Uber and will instead be launching a partnership deal with DoorDash.

How will this deal hurt Uber?

Starting on July 29, DoorDash will start deliveries for over 200 McDonald's locations across Houston. On their own, DoorDash's deliveries start at $6, rise based on distances and deals with individual restaurants, and don't include tips -- which is comparable to Uber and Grubhub's rates.

However, McDonald's is also joining DoorDash's subscription platform, Dash Pass, which offers free deliveries on orders of $12 or more in participating restaurants for $10 a month. That sounds like a much more affordable option for McDonald's customers and franchisees -- many of whom publicly complained about Uber's average 20% cut of each sale.

Uber is testing out a similar subscription service, Eats Pass, which will reportedly also cost $10 per month. But until that service officially launches in more markets, DoorDash could retain an edge against Uber and Grubhub (which doesn't offer a subscription service) among cheaper fast-food restaurants.

Uber won't abruptly lose all of its McDonald's business to DoorDash. However, restaurants in its existing network could add DoorDash as a second delivery option, and franchisees might promote the use of Dash Pass over Uber Eats.

Adding more delivery options per restaurant benefits McDonald's, which still only generates 2% to 3% of its U.S. sales from deliveries. But that strategy would hurt Uber, which isn't generating stable profits from its ride-hailing or food delivery businesses. Last quarter, Uber posted a net loss of $1 billion on revenue of $3.1 billion as it faced brutal competition and price wars in both markets. Uber Eats is also struggling to keep diners away from DoorDash and Grubhub. Data analysis company Second Measure claims that Uber Eats controlled 19.7% of the U.S. food delivery market in May, compared to a 32% share for DoorDash and a 31.7% share for Grubhub. The loss of McDonald's as an exclusive partner to DoorDash, which also serves fast-food giant Wendy's, could exacerbate that decline.

What does this mean for Grubhub?

Grubhub's stock initially dipped after McDonald's announcement, since it was a big victory for its top rival. But it also opens the door for Grubhub to strike a deal with McDonald's. Grubhub is already the exclusive delivery partner for Yum! Brands' (NYSE:YUM) KFC and Taco Bell restaurants in the U.S. Yum's exclusive partnership came with a $200 million investment in Grubhub, and that deal enabled Yum's franchisees to offer Grubhub deliveries without paying any extra delivery fees.

If Grubhub strikes a similar investment deal with McDonald's, it would certainly please the franchisees who run over 90% of its stores. DoorDash doesn't disclose how much of a restaurant's sales it retains from Door Pass subscriptions, but it probably isn't free -- which means that it benefits consumers more than participating restaurants.

Bad news for Uber, a mixed bag for Grubhub

McDonald's deal with DoorDash is terrible news for Uber, but it's not a headwind for Grubhub yet. Grubhub controls just 8% of the Houston market, according to Second Measure, while DoorDash claims a 59% share.

This indicates that McDonald's decision to partner with DoorDash in Houston was based on its market dominance and that it might work with Grubhub in its top markets -- like New York City, Chicago, and Philadelphia -- now that it isn't chained to Uber. There's also a tiny chance that McDonald's could strike a Yum-like deal with Grubhub to eliminate delivery costs for its franchisees.

On the other hand, DoorDash's deal with McDonald's indicates that the new market leader still has a lot of room to run -- which could cause serious long-term headaches for Grubhub, Uber, and other food delivery players. Investors in these companies should follow these developments closely to see if one platform gains a significant lead over the others.