After an uninspiring start to the year, the footwear company picked up the pace.

Skechers ( SKX -2.62% ) began 2019 on the wrong foot, posting its slowest revenue growth in years during the first quarter. The second quarter, though, was much better. Revenue growth returned to a double-digit percentage rate, and earnings soared as the footwear company kept its costs in check. Management also provided optimistic guidance for the third quarter, forecasting that all three of its segments would grow.

Skechers reported Q2 revenue of $1.26 billion, up 10.9% year over year, and $30 million above the average analyst estimate. Factoring out foreign currency exchange headwinds, revenue would have grown by 13.7%.

The international business continued to be the company's growth engine. Foreign sales soared 19.8% year over year, or 25.2% adjusted for currency exchange fluctuations. That was driven by 18.2% growth in the international wholesale business, as well as growth in the direct-to-consumer business. 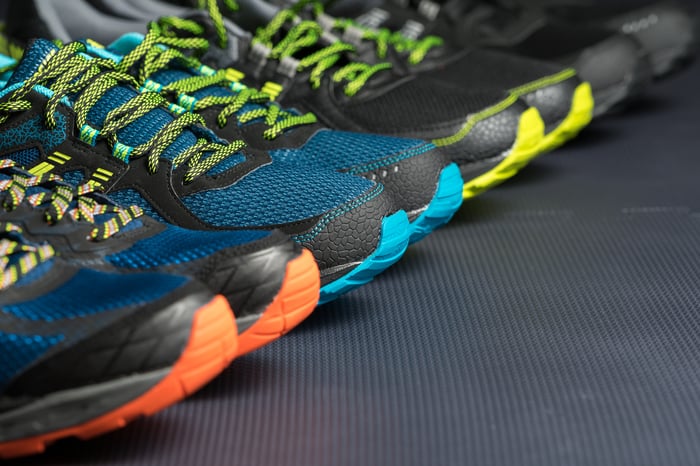 Direct-to-consumer, which includes sales via the company's retail stores and its e-commerce channel, rose 14.4%. Comparable-store sales jumped 4.9%, with solid growth both in the U.S. and internationally. That was a big improvement over the first quarter, when Skechers reported comps growth of just 0.7%.

While most of Skechers' businesses grew, its domestic wholesale business lagged, with sales falling by 3.8% year over year. That's better than the company was expecting, though, and a vast improvement over the 10.9% decline registered in Q1. For the full year, Skechers still forecasts domestic wholesale revenue will land in a range from flat to slightly positive. That outlook implies it expects a strong second half.

Skechers reported a gross margin of 48.5% in Q2, down from 49.4% in the prior-year period. Promotions to clear seasonal merchandise in some international markets were responsible for the decline, but improved pricing and product mix in the domestic wholesale business partially compensated for that.

Despite its lower gross margin, Skechers was able to boost its bottom line by growing revenue and holding operating expenses to a small increase. Selling, general, and administrative expenses were up just 4.2% year over year, less than half the rate of revenue growth. That helped boost operating income by 36.5% and per-share earnings by 69%. EPS came in at $0.49, beating analysts' consensus expectation by $0.16.

Going into the back-to-school shopping season, Skechers expects its strong growth to continue. The company expects Q3 revenue of $1.325 billion to $1.350 billion, with EPS between $0.65 and $0.70. The midpoints of those ranges represent year-over-year growth of 13.7% and 16.4%, respectively.

"With the momentum we are seeing in our business worldwide, we believe it will continue to grow double-digits this year," said COO David Weinberg during the Q2 earnings call. For the rest of the year, Skechers expects growth in the mid-teen percentages from the international business, and high single-digit percentage growth from the direct-to-consumer business.

Investors were rightly concerned after Skechers whiffed on its Q1 report in April, but the company's Q2 performance should put those concerns to rest.

Why Skechers Stock Gained 16% in April

1 Reason to Think Skechers' 35% Stock Surge Is for Real