Footwear company Skechers (NYSE:SKX) got off to a slow start in 2019. Revenue grew by just 2% in the first quarter, the slowest growth rate in many years. A strong U.S. dollar made Skechers' international business look weaker than it really was, and the U.S. wholesale business slumped thanks to challenging conditions and the timing of the Easter holiday.

Skechers expects its revenue growth to pick up a bit in the second quarter, although the days of consistent double-digit growth appear to be over for now. Here's what investors need to know about Skechers' second-quarter report, scheduled for after the market closes on Thursday, July 18.

A double-digit decline in the domestic wholesale business, along with sluggish comparable-store sales growth and currency headwinds, led to anemic revenue growth overall:

The international business performed better, growing by 9.3% year over year, or by 15% on a constant currency basis. The global retail business also grew, posting a revenue increase of 6.7%, but comparable-store sales rose by just 0.7%. 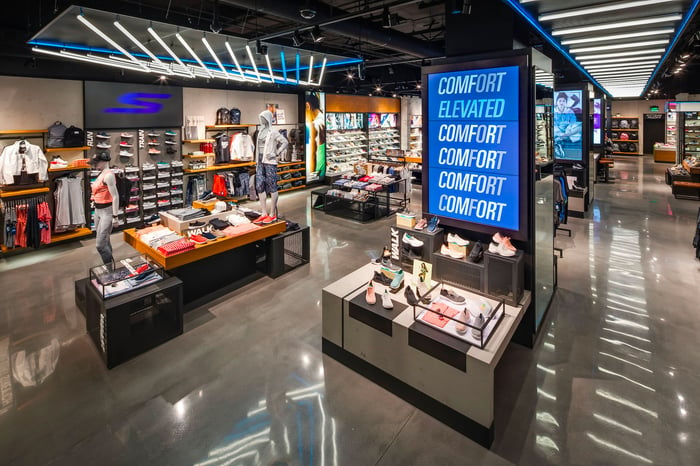 Skechers reduced its operating expenses in the first quarter by cutting back on domestic advertising. This was partially offset by increased spending to support a growing retail footprint, and the company's growth initiatives in China. Skechers has had issues reining in its costs as it invests in growth, but the company was able to keep spending in check in the first quarter.

Revenue and earnings growth are expected to accelerate in the second quarter:

Analysts are expecting Skechers' results to come in at the high end of the company's guidance ranges. Skechers expects second-quarter revenue between $1.200 billion and $1.225 billion, and earnings per share between $0.30 and $0.35. Both guidance ranges account for expected currency headwinds and the commencement of joint-venture operations in Mexico.

U.S. consumer spending remains strong, with the Commerce Department reporting better than expected retail sales in June. Skechers' international business is its growth engine, but the domestic wholesale business is still an important part of the company. In fiscal 2018, the domestic wholesale segment accounted for 27% of revenue, and 21% of gross profit. That doesn't include Skechers' retail operations, which span both the U.S. and international markets.

Shares of Skechers have recovered nearly all the losses they suffered following the first-quarter report in April. If the company comes up short again, those gains could vanish.