Skechers generates more than half of its revenue from international markets, so when the U.S. dollar strengthens against foreign currencies, the company's results take a hit. In the first quarter, revenue would have grown by 5.2% if not for the headwind from currency.

That's still slower growth than Skechers investors may be used to, and that's because the domestic wholesale business struggled in the first quarter. Segment sales were down 10.9%, enough to offset much of the growth in international markets. The timing of Easter, being a few weeks later this year, played a role in the domestic wholesale sales decline. The company expects domestic wholesale revenue to be flat for the full year.

The global retail business grew, although mostly due to new stores. Total company-owned retail revenue was up 6.7% year over year in the first quarter, but comparable-store sales increased by just 0.7%. Comparable-store sales rose 0.2% in the U.S., with stronger 2.3% growth in international markets. These numbers exclude stores in India that Skechers recently transitioned from third party to company owned. 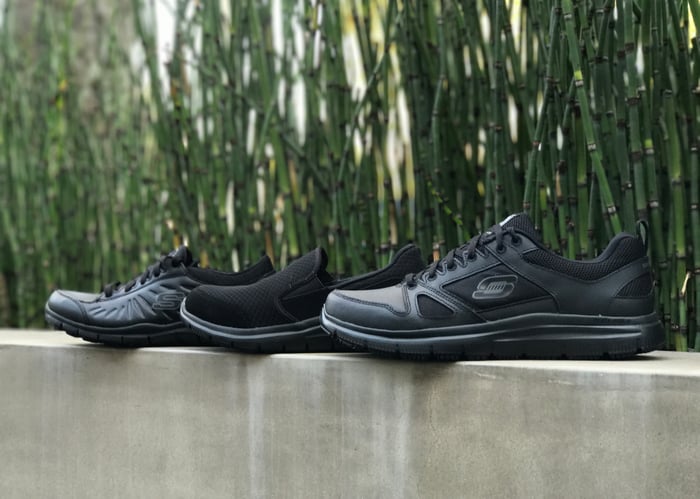 Operating income, which is pre-tax, did go up, to the tune of 11.5%. While Skechers' gross margin dipped slightly thanks to higher discounts and currency effects in international markets, that was more than offset by lower operating expenses and higher revenue. Skechers' total operating expenses dropped 2.3% year over year as the company pulled back a bit on domestic advertising. The company boosted spending in China by $7.8 million to support growth, and spent $8.0 million related to new stores, but this spending was offset by a $15.8 million performance-based government rebate in China.

Looking forward to the second quarter, Skechers expects to produce revenue between $1.200 billion and $1.225 billion and earnings per share between $0.30 and $0.35. That represents year-over-year growth of 6.9% and 12.1%, respectively, at the midpoints of those ranges.

This guidance isn't anything to write home about -- Skechers has routinely produced double-digit revenue growth over the past few years. But it does show an improvement over the first quarter.

While the market didn't like Skechers' first-quarter results, the company still managed to grow revenue despite multiple headwinds. The international business, excluding currency effects, continued to fire on all cylinders. Skechers still has room to grow in China, and it's in the early innings of its growth story in India. This growth slowdown may last for a while, but there are plenty of reasons to believe it won't last forever.