About a decade ago, Toys R Us had the opportunity to pivot its business into an interactive model that kept consumers visiting its stores. Had it been implemented, it may have kept shoppers from changing their habits when it came to buying toys.

The company failed to do that largely because it had too much debt from a leveraged buyout to properly invest in revamping its stores. Now the chain -- or at least a successor company that owns its trademarks -- has plans for a comeback that includes new retail stores.

It's not going to work in any appreciable way. One or two novelty locations may succeed based on nostalgia, but even that seems unlikely since consumers have moved on. 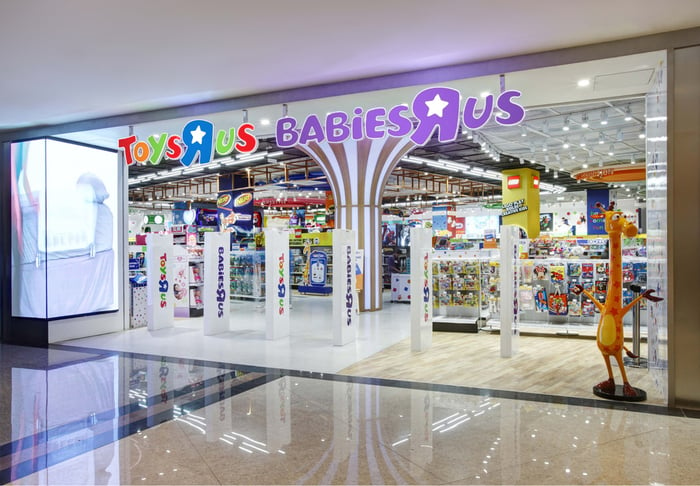 Toys R Us was once a powerful brand. Image source: Toys R Us.

Where did the customers go?

Amazon (NASDAQ:AMZN), Walmart (NYSE:WMT), and Target (NYSE:TGT) helped Toys R Us lose market share before it closed and stepped into the breach it left from its June 2018 shutdown. The death of Toys R Us put about $12 billion in sales into play. These three large retailers took most of that business while driving more sales online, according to Profitero's eCommerce Toy Story report. 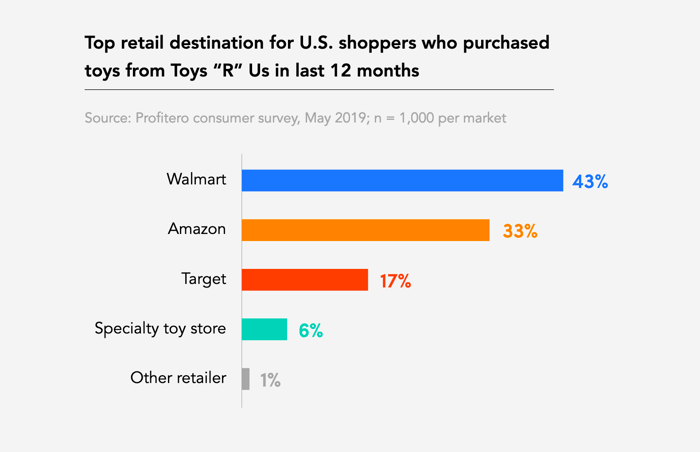 As you can see from the chart above, about 94% of the former Toys R Us business has gone to Walmart, Amazon, and Target. Those companies share a couple of traits -- they offer very low prices and have a strong digital presence (in Amazon's case a mostly digital presence).

Walmart and Target have added to their in-store toy selection and took that even further during the holiday season. All three companies pushed toys on their websites/apps, which has led to eMarketer predicting that digital toy sales will grow from 31.4% of all U.S. toy sales in 2019 to 47.9% by 2023.

The 6,000-to-10,000-square-foot locations would be interactive, have play areas, and host activities. Those are all things the old company should have done, and they are hallmarks of the specialty toy business, which largely consists of stores in strip malls and other less pricey real estate sites. The first two new Toys R Us locations are planned for the Galleria in Houston and Westfield Garden State Plaza in Paramus, New Jersey -- both top-tier malls.

It's a novelty, not a comeback

The new Toys R Us sounds exactly like what the old Toys R Us should have become a decade or so ago. Even then -- when the chain had $12 billion in sales and hundreds of stores -- it often could not compete with Amazon, Walmart, and Target on price.

Now, with just a couple of stores with high overhead and corporate costs, the chain won't have any sort of pricing power. That puts it in a position where people may visit and interact with its stores, but a decent percentage of them will then quietly make their purchase on their phone or at a Target or Walmart later on.

The new Toys R Us has a solid plan that's at least a decade too late. Nostalgia and well-executed stores may bring people in, but the company won't have the pricing power to compete.

A retailer might be able to take on Amazon, Walmart, and Target by going after underserved niches. That works for small specialty toy stores with relatively low overhead. That's not the model Toys R Us plans to follow, and this comeback is doomed before it even gets started.