Apple (NASDAQ:AAPL) is set to report fiscal third-quarter earnings results next Tuesday, and the Mac maker's solid guidance provided in April had helped boost investor confidence after a weak start to 2019. Apple has also been facing challenges in China, one of its most important markets and the largest smartphone market in the world, with many consumers boycotting the brand.

One Wall Street analyst thinks things are about to start getting better for the Cupertino tech giant. 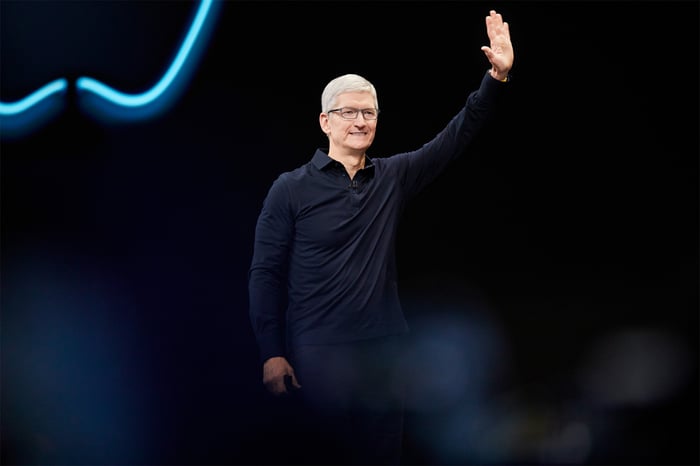 Morgan Stanley analyst Katy Huberty issued a research report on Apple this morning, reiterating an overweight rating (equivalent to a buy) while boosting her price target from $231 to $247. "The combination of negative investor sentiment, the potential for a services acceleration in June, and a low bar for September guidance keep us positively biased into earnings," Huberty wrote in a note to investors.

That view contrasts somewhat with other analysts like Rosenblatt's Jun Zhang, who believes that services growth will decelerate meaningfully in the back half of 2019, despite the company launching numerous services this fall like Apple TV+ and Apple Arcade. Zhang slapped a sell rating on Apple shares earlier this month alongside a $150 price target. Huberty believes that services revenue will accelerate for the first time in over a year, which could go a long way in "regaining investor confidence in the Services narrative" and warrant better valuations.

iPhone demand in China may also be improving, in Huberty's view, pointing to third-party data from Jiguang, a Chinese mobile analytics company that offers messaging and push notification services to developers. The data suggests that the iPhone's market share may have ticked up in the quarter ending in June.

Apple's guidance for the quarter ending in September will be an important area to watch, and Huberty thinks the risk of Apple missing expectations with its outlook is fairly low. The company typically releases new iPhone models at the end of September, oftentimes with only a few days of sales of the latest versions captured within the fiscal fourth quarter.

For reference, Apple's outlook for the quarter ending in June calls for revenue of $52.5 billion to $54.5 billion, which at the midpoint would be essentially flat year over year. That's somewhat expected, as the fiscal second quarter tends to be seasonally slower as consumers await the newest iPhones. One important strength of the services business is that it is not susceptible to seasonality, and reacceleration could help allay investor fears.

Both Huberty's old and new price targets would put Apple's market cap back above $1 trillion. Based on Apple's current number of shares outstanding, the per-share price threshold is currently $217.34.