Last month, Richard Baker -- the chairman of Hudson's Bay (OTC:HBAYF) -- teamed up with several other big shareholders and offered to buy the company at a 48% premium to its pre-announcement share price.

At first glance, this might seem like a deal too good to pass up. However, less than a year ago, Hudson's Bay CEO Helena Foulkes declared that the retail conglomerate's real estate was worth about three times the offer price of 9.45 Canadian dollars ($7.19) per share. Furthermore, while the company has been losing money, it is in the midst of a major restructuring that could lead to much better results within a year or two. As a result, many minority shareholders aren't interested in a buyout at the price Baker and his allies are offering. Indeed, the odds of the deal going through -- at least at the price initially proposed -- seem to be getting longer by the day.

Opposition to the go-private proposal crystallizes

However, investors haven't waited for the independent valuation to start criticizing the proposed transaction. For example, just a week after the offer was announced, Jonathan Litt -- head of activist fund Land and Buildings Investment Management -- argued that the buyers could afford to pay at least twice as much.

Litt has been a sharp critic of Hudson's Bay and its management over the past couple of years. He believes that shareholders could get the most value by breaking the company up and selling most of its assets piecemeal.

Another indication that investors are skeptical is the stock's recent trading history. Hudson's Bay stock has been trading at a modest premium to the proposed buyout price for more than a month, indicating that investors expect the offer price to be increased. 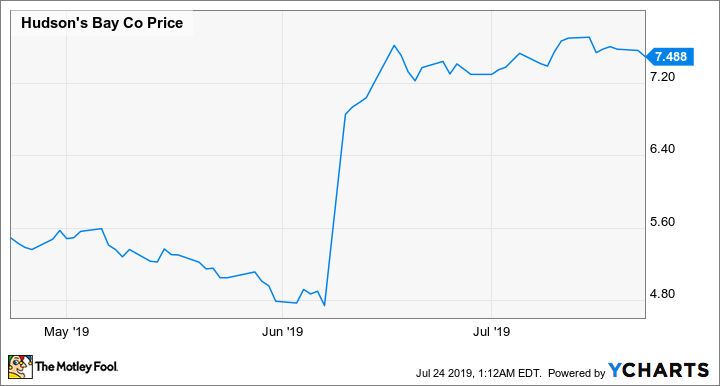 Another fund seeks to block the go-private deal

Earlier this week, Canadian investment firm Catalyst Capital Group registered its dissatisfaction with the CA$9.45 ($7.19) go-private offer. It plans to vote against the deal and has urged the board to seek better alternatives.

However, that's not all Catalyst is doing. The fund has also launched a tender offer, seeking to acquire up to CA$150 million ($114 million) of Hudson's Bay stock at a price of CA$10.11 ($7.69) per share. That would be enough to buy approximately 8% of the company's shares.

This tender offer is significant because even if the board supports going private, Baker's group will need the approval of most of the minority shareholders who aren't involved in the deal. Catalyst's tender offer gives investors who want to cash out an opportunity to do so at a superior price to what the buyout group is offering. These investors would have been the most likely to vote in favor of the go-private deal, but now their shares are likely to go to Catalyst, which will oppose the buyout. In short, Catalyst is aiming to stack the deck ahead of a vote on whether to approve the proposed transaction.

In the coming months, Baker and his partners will likely recognize that their offer (as it currently stands) won't be approved. It's quite possible that they will respond by pulling the bid, which could cause the stock to crash. A recovery would then depend on Hudson's Bay successfully executing its turnaround plan.

On the other hand, there's a good case for increasing their offer in an attempt to win over more shareholders. Hudson's Bay is clearly worth less than the full value of its real estate -- it is losing money and any attempt to stem those losses will be costly -- but there's a huge gap between the real estate value and what Baker's group has offered so far. That means there's room for the buyout group to raise its offer without overpaying.

Thus, we will see soon enough whether Richard Baker and his partners are serious about making a deal happen. Without a significantly higher offer price, there's little chance that a go-private deal for Hudson's Bay will get all of the necessary approvals.