Please ensure Javascript is enabled for purposes of website accessibility
Log In Help Join The Motley Fool
Free Article Join Over 1 Million Premium Members And Get More In-Depth Stock Guidance and Research
By Chris Neiger - Updated Jul 25, 2019 at 10:37AM

The updated collaboration should help Starbucks build on its current delivery successes, but the benefits for Uber are less clear.

Starbucks (SBUX 2.98%) and Uber Technologies (UBER 2.47%) announced this week that they are expanding their food delivery partnership. Starbucks currently offers U.S. customers in six select markets the ability to have their orders delivered using the Starbucks Delivers service, with Uber Eats making the actual deliveries. The expanded partnership will bring Starbucks Delivers nationwide by early 2020.

Starbucks' group president and chief operating officer, Rosalind Brewer, said in a press release: "We are driven to create new and unique digital experiences that are meaningful, valuable and convenient for our customers." She added that "Partnering with Uber Eats helps us take another step toward bringing Starbucks to customers wherever they are."

Uber Eats is the largest global delivery service outside of China, and Starbucks said that Uber is the "preferred delivery partner" for the coffee giant.

Jason Droege, Uber's vice president of UberEverything, said in the same statement: "Our customers are huge Starbucks fans and love being able to get their favorite items delivered with Uber Eats speed. We're excited to expand our partnership across the United States to make ordering their favorite coffee and breakfast sandwich as easy as requesting a ride."

The partnership fits well into Starbucks' focus on expanding its food delivery options worldwide, but the benefits for Uber are a little murkier. Here's why. 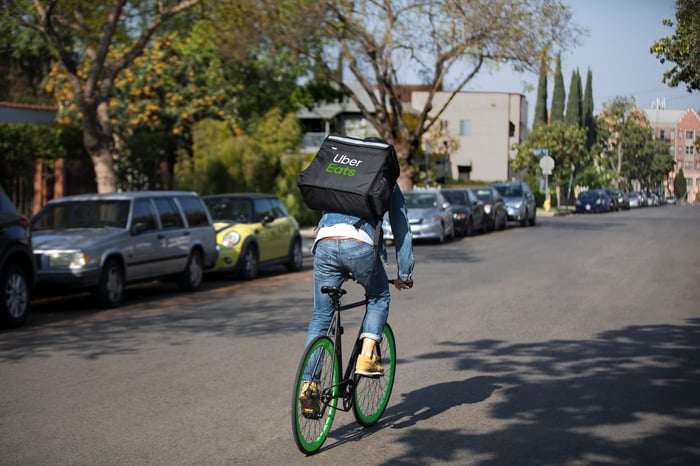 Starbucks has high hopes for deliveries

Starbucks said that it's expanding its partnership with Uber Eats to address the online food delivery segment, which will be worth $24 billion in the U.S. by 2023, up from $17 billion in 2018, according to a 2019 eServices report.

The company has expanded the number of stores that offer Starbucks Delivers recently, with more than 1,600 stores offering the service at the end of the second quarter. Starbucks CEO Kevin Johnson said back in April that his company is "excited about the potential" that delivery services bring.

While the partnership with Uber Eats is confined to the U.S., Starbucks is also expanding its food delivery options worldwide. For example, Starbucks said at the end of the second quarter that Starbucks Delivers is now in more than 2,100 stores across 35 cities in China. However, Starbucks uses Alibaba for its deliveries in China.

What this means for Uber

At a glance, Uber Eats seems like a promising endeavor. Uber Eats' sales grew by 149% last year, and in the first quarter of this year, revenue from the segment increased 89% year over year.

But investors may not want to get too excited about Uber Eats' growth and the company's updated partnership with Starbucks. Uber has said in the past that it sometimes loses money on its deliveries, especially when they're for large companies.

The company said in a filing in April, before its initial public offering, that it sometimes charges a lower service fee to large chains so that it can "grow the number of Uber Eats consumers." It added: "As we expand our offerings to additional cities, our offerings in these cities may be less profitable than the markets in which we currently operate. As such, we may not be able to achieve or maintain profitability in the near term or at all."

All of this means that despite Uber Eats' impressive revenue growth, the company's delivery service isn't exactly a promising business model at the moment, even with its expanded partnership with Starbucks.

Uber Eats is facing a very competitive food delivery market in the U.S., and it's still too early to tell whether the delivery service is a viable business. For that reason, Uber investors shouldn't be too excited about this latest announcement.

Starbucks investors, on the other hand, should be pleased that the company is expanding its delivery option to far more customers than ever before. As the service expands, investors should pay close attention to the number of stores that offer delivery, and to any new light shed by management on how it's affecting sales.