Management breaks down its plan to speed growth back up.

This week Domino's ( DPZ -0.61% ) announced earnings results that most global restaurant chains would love to see. The pizza chain gained market share in the core U.S. geography while adding over 200 new locations to its worldwide store base. Earnings shot higher by 23%.

Yet the report contained worrying signs about the competitive environment both at home and internationally. These challenges all but ensure that investors will see a much slower growth pace for 2019 than they've enjoyed over the last few years.

CEO Richard Allison and his team detailed the key factors behind that slowdown in a conference call with investors while expressing confidence in the chain's long-term growth story. Below, we'll look at a few highlights from that presentation. 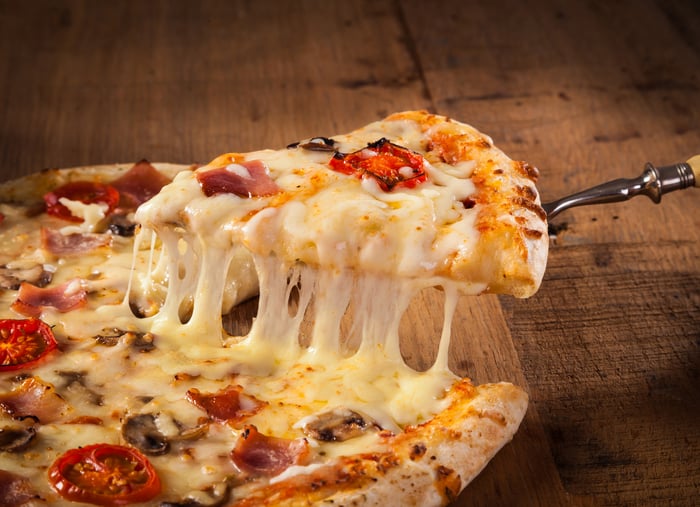 Our same-store sales performance for the quarter came in toward the lower end of our three-year to five-year outlook, as we continue to navigate through headwinds related to aggressive activity from third-party delivery aggregators. I do not expect this activity to ease in the near term.
-- Allison

Same-store sales decelerated in the core U.S. market for a fifth straight quarter, dipping to 3% from a high of 8% in early 2018. Meanwhile, the chain's growth this quarter came mainly from increased average spending, not from higher order volumes. These negative trends were driven by spiking competition from home delivery aggregators like Uber Eats and Grubhub.

Executives say they've got the right economics to win this fight over the long term, and they're determined to use higher order volumes as the backbone of their growth strategy. The chain's recent national half-price pizza promotion represents an aggressive step to recapture that customer traffic mantle.

We have opened approximately 100 net units per month over the last 12 months, which we believe demonstrates the broad and enduring strength of our four-wall economics combined with the efforts of the best franchise partners in the restaurant industry.
-- CFO Jeff Lawrence

Domino's grew overall sales by 8% after adjusting for currency exchange, or more than double the same-store sales increase. That healthy boost was powered by the addition of 200 new locations during the quarter, including 42 in the mature U.S. market. Domino's is aggressively adding to its base today, with new openings through the last six months up 50% compared to the same period last year.

Allison said the chain's "fortressing" strategy, which involves opening new locations close to established stores, is still the right approach despite the pressure it puts on short-term growth. Other elements of Domino's approach include shortening delivery time and lowering costs while improving customer service through technology like the planned GPS delivery tracking tech set to launch later this year.

"Rest assured that we will not slow down. We will continue to invest and innovate aggressively to stay at the forefront of our industry."
-- Allison

The more modest growth profile over the past three quarters hasn't convinced management to scale back their spending plans. On the contrary, the chain is plowing ahead with tests of self-driving delivery cars and machine-learning analytics for marketing and store placement insights.

These investments aren't likely to save the company from posting growth at the low end of its 8%-to-12% annual target this year. Yet they're necessary to keep Domino's on top of the delivery industry, management says. And with over $300 million of free cash flow generated over the past year, the company has plenty of room to make these types of bold bets that should support continued market share gains no matter what the competition is doing.