There's a first time for everything, and on Wednesday, we saw Snap (NYSE:SNAP) shares move higher the day after the company posted its second-quarter results. This is the first time that Snapchat's parent company moved higher on earnings when it wasn't the fourth-quarter report.

One can argue that it's merely a coincidence that Snap stock had moved lower in each of its seven previous first-, second-, and third-quarter reports since going public in early 2017. However, let's dive into the reasons why the reinvigorated social camera specialist soared 19% on Wednesday. 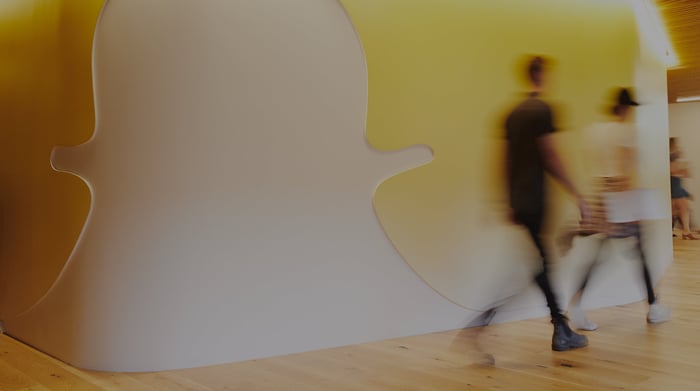 1. Accelerating growth is a beautiful thing

Snap delivered a blowout performance, and revenue climbing 48% for the quarter is its headiest growth in more than a year. More importantly, Snap rattled off back-to-back quarters of accelerating top-line growth for the first time. Momentum is squarely in Snap's corner these days.

Fresh guidance for the current quarter calls for year-over-year revenue to rise 38% to 46%. This would be an end to the acceleration streak even if it lands at the high end, but Snap has already proven adept at topping conservative guidance.

2. Platform popularity is no longer a concern

Snap had a rough first years on the market, as worrywarts fretted about the fickle nature of Snapchat's popularity with its largely young user base. The first few quarters of Snap's publicly traded life were accompanied by the dark cloud of slowing user growth, culminating in the second and third quarters of 2018 when its audience actually declined sequentially.

We're back to solid gains in popularity. Snapchat went from an average of 186 million daily active users in the fourth quarter of last year to 190 million in the first quarter to what is now a record 203 million people. It's also worth noting that Snap saw growth in all three of its geographical regions -- U.S., Europe, and the rest of the world -- landing record crowds in all three territories.

3. Snap was already a market darling

Snap may have been batting .222 going into this week's report, but it was already trending in the right direction. The post-earnings declines were moderating, with single-digit declines during the three most recent down quarters after double-digit percentage slides in the four earlier down periods. The stock had even initially opened higher last time out, making Wednesday's rise the third time in a row that the shares open higher the day after its quarterly earnings release.

Investors were also cashing in on Snap's rebound. The stock has now more than tripled in 2019, and that's not an easy feat for a $24 billion company. Snapchat's parent company has surprised investors this year. It has turned around user growth. It's growing engagement with new features that users are actually applauding. It's been a rough round trip for Snap with the stock back above its original $17 IPO price, but it looks as if this time, the turnaround is legit and sticking around.