It hasn't been a great year for Bristol-Myers Squibb (NYSE:BMY) so far. Despite posting solid first-quarter results in April, the big pharma company's shares have dropped close to 16%. Investors have been concerned about Opdivo's growth prospects. Many remain skeptical about the drugmaker's pending acquisition of Celgene (NASDAQ:CELG).

BMS announced its second-quarter earnings results before the market opened on Thursday. Did these results change perceptions about the company? Maybe a little. The company shared some good news that investors should like. Here are five things you need to know from Bristol-Myers Squibb's Q2 earnings update. 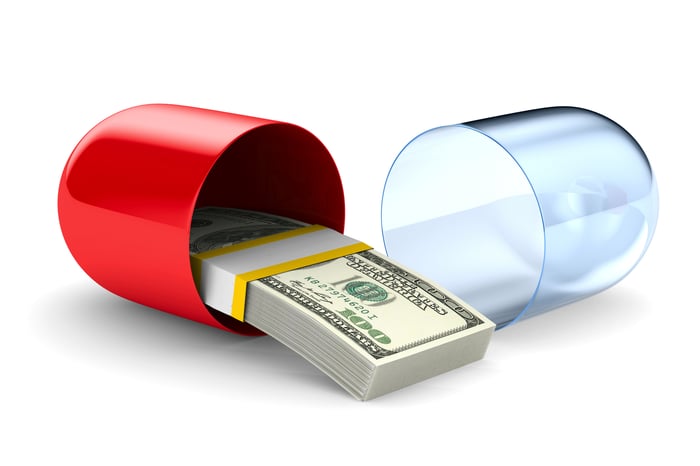 The company once again reported better-than-expected revenue. For Q2, revenue of $6.3 billion was up 10% year over year. Wall Street analysts anticipated $6.1 billion.

Anticoagulant Eliquis continued to fire on all cylinders, with sales soaring 24% year over year to $2 billion. Sales for immunotherapy Opdivo rose 12% to $1.8 billion. The company's three other blockbuster drugs also delivered solid growth: Sales for Orencia, Sprycel, and Yervoy increased by 9%, 2%, and 17%, respectively. The biggest percentage jump, though, came from multiple myeloma drug Empliciti, with sales skyrocketing 42% year over year to $91 million.

The drugmaker reported Q2 earnings of $1.4 billion, or $0.87 per share, based on generally accepted accounting principles (GAAP). This reflected a huge improvement over the $373 million, or $0.23 per share, posted in the prior-year period. However, the second quarter of 2018 included a $1.1 billion charge related to a collaboration with Nektar Therapeutics, which was offset partly by a $409 million in the recent quarter related to the pending Celgene acquisition.

BMS announced non-GAAP (adjusted) earnings of $1.9 billion, or $1.18 per share, a 17% year-over-year increase on a per-share basis. This result handily beat the consensus analysts' non-GAAP earnings per share estimate of $1.06.

Bristol-Myers Squibb's Q2 earnings press release referenced a couple of announcements the company made on Wednesday evening related to the Checkmate-227 phase 3 clinical study. And there was mixed news from this study.

The differences between the GAAP and non-GAAP EPS ranges are primarily due to acquisition-related costs. With its non-GAAP earnings guidance increase, BMS should come in above the current consensus analysts' earnings estimate for full-year 2019.

5. On track with acquisition plans

CEO Giovanni Caforio said that the company is "advancing our integration planning for the acquisition of Celgene." BMS expects the deal to close by the end of 2019 or in early 2020.

There is one hitch, though: The company will have to sell Celgene's immunology drug Otezla to satisfy regulators. The Federal Trade Commission appears to be concerned about BMS having both Otezla and Orencia in its lineup.