Apple (NASDAQ:AAPL) is one of the most beloved brands in the world, with an installed base of 1.4 billion active devices around the world. The company churns out a massive $60 billion in free cash flow selling products that other manufacturers sell at cheaper price points, but millions of customers stick with Apple anyway. There's no better testament to the strength of a brand than that.

The main issue some investors have with Apple is that the iPhone, which is the company's largest source of revenue, is not growing like it once did. Apple is pushing more and more into services to pick up the slack, but it hasn't been enough to offset the decline in iPhone revenue over the last few quarters. 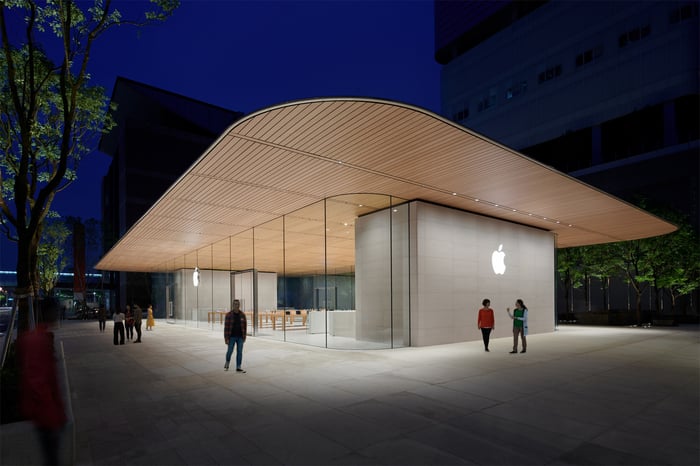 1. The installed base is still hitting new highs

Apple stock has rebounded off its 2018 lows by climbing 31% so far this year. That's despite the 5% decline in total revenue through the first half of fiscal 2019. The main culprit has been lower sales in China.

Investors have brushed off the softness on the top line because the problem in China is likely temporary. Some of the China issues are outside of Apple's control, such as the trade war and the impact on the consumer. However, CEO Tim Cook mentioned on the last conference call that the company had implemented pricing changes and new trade-in policies in China, which are helping the market return to growth.

Meanwhile, Apple's services business, including Apple Pay, Apple Music, Apple Care, App Store, and cloud services, continues to grow at a double-digit rate, and it accounted for 20% of Apple's revenue in the fiscal second-quarter ending in March.

Some analysts have expressed concern over a slowdown in App Store sales in recent months. But this appears to be related to the slowdown of new regulatory approvals for gaming apps in China and therefore doesn't hurt the long-term trajectory of the App Store business.

Apple's services business should continue to grow overall. The active installed base across all major products, such as the Mac, iPhone, and iPad, reached an all-time high last quarter, which naturally provides a built-in customer base for apps and subscriptions.

Apple had 390 million paid subscribers, which include subscriptions for third-party app services. Management expects this to reach 500 million during 2020.

New services announced recently, such as the Apple Card and Apple TV+ (launching this fall), are catalysts for further growth in the short term. Cook also confirmed during the last conference call that there are other services in the works.

2. It's returning cash to shareholders

While Apple saw revenue climb more than 500% over the last decade, revenue over the last three years has only increased by about 20%. Growth is slowing as the smartphone market has become more saturated, but the massive pile of cash that it has accumulated over the years selling all those iPhones and iPads is being dished back to shareholders.

It has returned a total of $39.5 billion through a combination of dividends and share repurchases just in the last two quarters. Additionally, the quarterly dividend payout was recently approved for a 5% increase to $0.77 per share, bringing the forward dividend yield to 1.48%.

The company has plenty more cash to dig into. The net cash balance stood at $113 billion at the end of the last quarter. Management plans to eventually reduce its net cash balance to zero -- where the cash on the balance sheet equals the debt -- to better optimize its capital structure.

All that said, Apple should remain a great dividend stock.

3. It's investing billions in its future

The lack of revenue growth at Apple doesn't mean its best days are behind it. The Cupertino, California, company has plenty of cash to invest in its future, including the $60 billion it generates in free cash flow.

It is spending $10 billion on data centers over the next five years, with $4.5 billion being spent through 2020. This investment is likely related to the growing demand for services, stemming from the massive installed base of users.

Apple is also expanding its workforce and opening more retail locations in the U.S. All of these investments reflect a company that is still on the move. We will know more about the company's future plans when Apple reports earnings on July 30.

The stock is modestly valued right now with a P/E ratio of 17.05, even after its bounce this year. I think the power of Apple's brand and the amount of cash flow it generates annually make it a worthy investment for the long term.