Live Nation Entertainment (NYSE:LYV) announced second-quarter 2019 results on Thursday after the market closed. While the live events leader technically fell short of expectations on the top line, it also drove outsized bottom-line growth and demonstrated its highest-ever number of concerts to end a first half.

With shares ending up around 1.4% Friday after briefly dipping into negative territory this morning, let's grab our wristbands for a closer look at what Live Nation accomplished over the past few months. 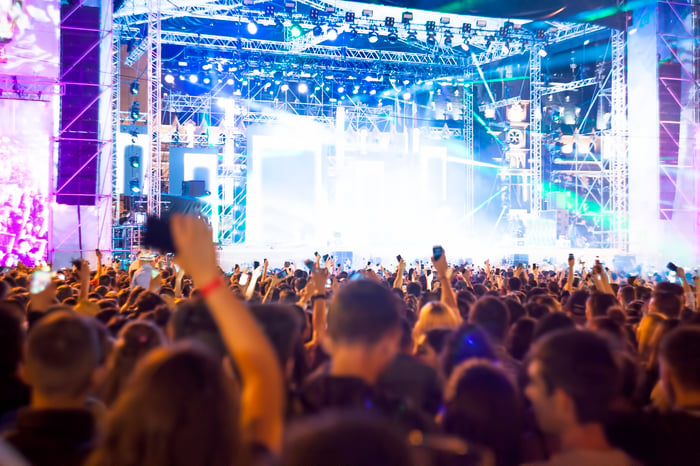 We continue to benefit from a strong tailwind in the live event, experience-based economy of today. The global ticket revenue from our concerts is up 16% for the first half of the year, as we continue to see a strong supply of artists touring matched with global consumer demand. And within this, the ticket revenue from concerts outside our top 100 artists is up 32% so far this year, demonstrating that the demand for live music is strong and growing from the largest stadiums to the local clubs.

Here again, Live Nation does not provide specific forward guidance. But the company did note it's on track for nearly 100 million fans to attend approximately 38,000 concerts in 2019.

Rapino also elaborated that the company continues to expect double-digit growth in adjusted operating income from its concerts segment. Meanwhile, Live Nation anticipates mid- to high teens percent growth from its sponsorship and advertising business -- a clarification from the "double-digit" verbiage Rapino used three months ago.

And finally, Rapino vaguely added that Ticketmaster should "drive growth in GTV and operating results" this year. By comparison, last quarter he called for the ticketing business to generate "mid-single-digit" growth.