Coffee, energy drinks, and alcohol could make Coca-Cola an exciting stock to own again.

Coca-Cola ( KO 0.89% ) is often considered a rock-solid investment because it owns time-tested brands, generates plenty of cash, and has hiked its dividend annually for over half a century. However, declining soda consumption has throttled Coca-Cola's sales growth in recent years, forcing it to aggressively expand its portfolio with new beverages, including teas, juices, sports drinks, and bottled water.

That diversification helped Coca-Cola keep growing -- its organic sales rose 5% last year, its free cash flow grew 14%, and its adjusted earnings improved 9%. Looking ahead, the 133-year-old company continues to expand its reach into adjacent markets with new products. Let's examine three new strategies and how they could boost the beverage maker's growth. 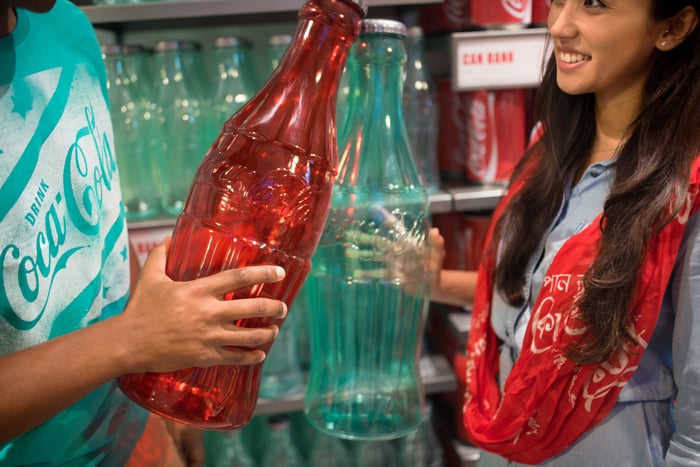 During last quarter's conference call, Coca-Cola stated that it would launch its first ready-to-drink Costa Coffee products in the second quarter. Fortune Business Insights estimates that the ready-to-drink coffee market, which is particularly strong in Asia, could grow from $19.1 billion in 2017 to $36.6 billion in 2025 -- so it could eventually become a big growth engine for Coca-Cola.

But that's not Coca-Cola's only coffee play. There's also Coca-Cola Coffee, which blends coke with coffee. The company initially tested the drink in Japan, a major market for bottled coffee, and recently decided to launch the drink in over 25 new markets by the end of 2019.

Coca-Cola owns nearly a fifth of Monster Beverage ( MNST 0.89% ), and that stake often fuels speculation concerning a takeover. After all, the energy drink market is still growing even as the soda market fizzles out. Research firm Mordor Intelligence estimates that market could grow at a CAGR (compound annual growth rate) of 7.1% between 2019 and 2024 to become an $83.4 billion market. Wall Street expects Monster's revenue to rise 11% this year.

But instead of buying Monster, Coca-Cola recently launched its own energy drink called Coca-Cola Energy. Monster argued that Coca-Cola violated its contract by launching an energy drink, and entered arbitration with the company last October.

However, the American Arbitration Association recently ruled that Coca-Cola hadn't breached its contract, clearing the way for Coca-Cola Energy's global launch. It's unclear if Coca-Cola Energy will gain a foothold against energy drink leaders like Red Bull and Monster, but if it does it could help Coca-Cola rebrand itself as a maker of energy drinks instead of sugary sodas.

Japan's diverse drink market is a great place for Coca-Cola to test out new products like Coca-Cola Coffee. That's why it recently announced that it will launch Lemon-Do, an "alcopop" which was well-received during its test run, across all of Japan in October.

Alcopops are soda cocktails infused with spirits like vodka. They are cheaper than canned beer, and popular with women and younger drinkers. A 12 oz. can of Lemon-Do costs about $1.40, and different versions contain 3%, 5%, and 7% alcohol. If Lemon-Do continues to gain drinkers across Japan, it's highly likely that Coca-Cola will expand it to other markets -- which could open the door for more alcoholic drinks.

Coca-Cola's coffee, energy drink, and alcohol efforts are attracting the most attention, but the company is also constantly testing out new variants of its flagship sodas. Notable examples include Coca-Cola Fiber, which includes extra dietary fiber, new flavors like orange vanilla Coke, and a myriad of reduced sugar and sugar-free variants.

Simply put, Coca-Cola isn't simply sitting still and waiting for consumers to lose interest in its flagship sodas. It's still innovating and expanding into adjacent markets, and some of these experiments could evolve into the beverage maker's new growth engines.