The economic conditions that helped Grupo Aeroportuario del Pacifico (NYSE:PAC) average double-digit annual revenue growth over the past three years are showing signs of deterioration. Mexico's economy posted 0% year-over-year growth in gross domestic product (GDP) in the first quarter of 2019, and preliminary numbers show a 0.2% year-over-year decline in GDP in the second quarter. Weaker activity in both the service and manufacturing sectors, exacerbated by trade tensions, has also cut into the country's forward prospects: This month, International Monetary Fund (IMF) cut Mexico's full-year 2019 GDP growth forecast from 1.6% to 0.9%.

Despite the abrupt deceleration in the Mexican economy, "GAP," as Grupo Aeroportuario refers to itself, appears on track to meet the full-year outlook management provided to investors in January. The operator of 12 Mexican airports and one international airport managed decent growth in the second quarter of 2019.

Let's zero in on key metrics and details from the last three months. Note that all comparative numbers that follow are presented against those of the prior-year quarter. 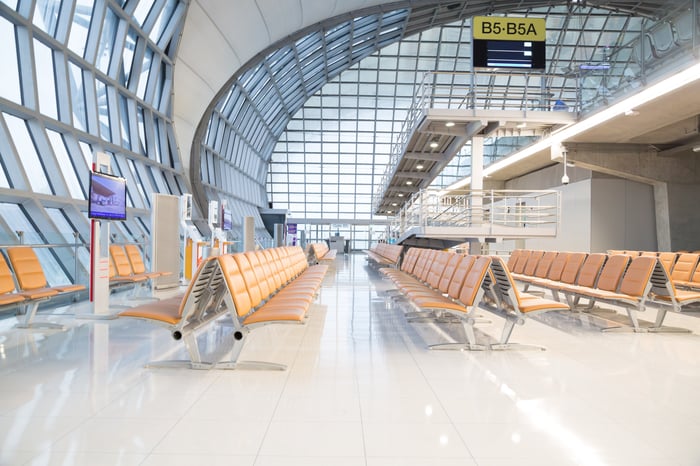 Management left Grupo Aeroportuario's full-year 2019 outlook untouched as the organization heads into the back half of the year. In addition to the aforementioned targeted total passenger traffic increase of 7%, GAP's 2109 outlook anticipates growth in aeronautical and non-aeronautical revenues of 13% and 20%, respectively. The company foresees a total revenue advance of 15% and expects to hit adjusted EBITDA margin of 69% in 2019.

Even as Mexican economic output falters, GAP continues to exploit opportunities in the country's relatively vibrant tourism and business travel sectors by widening its own capacity. The company opened 11 new domestic routes and seven new international routes during the quarter, most of which sport between two and four weekly frequencies. Despite tepid underlying conditions, GAP is bent on proactively expanding passenger traffic, which is the key to its long-term growth strategy.