Amazon flipped the script on investors in the second quarter, leaving some wondering if they were reading the right e-commerce giant's earnings report.

Amazon.com's ( AMZN -1.38% ) latest earnings report may have left some investors feeling like they were living in "Bizarro World."

Bizarro was a comic book character drawn as the mirror image of Superman, first appearing in a 1958 DC Comics strip. In contrast to the familiar superhero, Bizarro was at times a villain or an antihero for Superman, embodying the direct opposite of his qualities. The concept of having a mirror-image doppelganger, referencing Bizarro, was also used on a classic episode of Seinfeld in the 1990s.

The Bizarro term also seems like an awfully apt metaphor for Amazon's most recent financial report.

Shares of Amazon declined a mild 1.5% on July 26, the day after the earnings report came out. The sell-off may have frustrated shareholders in the near term, but long-term Amazon investors still have reason to smile. Amazon is still up 31.2% on the year, about 10 percentage points higher than the S&P 500, and up a stunning 500% in the past five years, or almost eight times the return of the broader market.

While other big tech names had positive pops after their respective earnings reports, why did Amazon get short shrift from investors this earnings season? 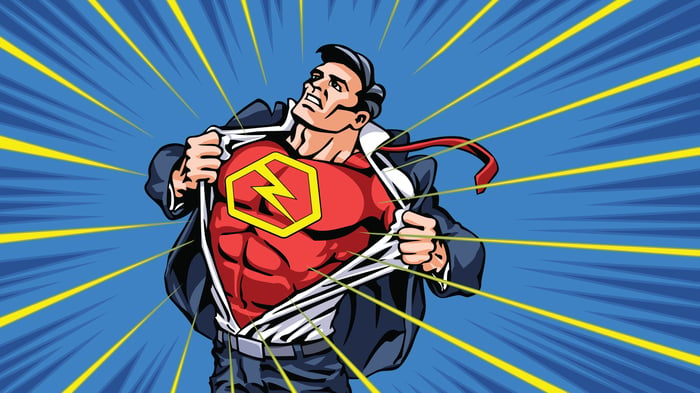 Amazon's revenue and profit are heading in opposite directions. Image source: Getty Images.

A company unto its own

One differentiator between Amazon and its big-tech peers is the company's willingness to make huge investments at the expense of near-term profits in pursuit of rapid growth. Throughout its corporate life, Amazon has gone through alternating periods of either a) heavy investment, pushing down profits but driving revenues, or b) easing off spending, which slows revenue growth but lifts profitability.

Over the past year or so, Amazon had been firmly following the "b" line. The e-commerce giant had absolutely trounced analyst earnings-per-share estimates seven quarters running, delivering all-time record profits in each of the prior four quarters.

Still, even during that period, Amazon had been criticized for its decelerating revenue growth. Though the stock has pushed higher this year, it's still below the all-time highs set last September, as investors had begun to think the company's days of heady growth were behind it.

However, that narrative was flipped on its head this past quarter as Amazon's EPS of $5.22 missed analysts' estimates of $5.54, all while the e-commerce giant's revenue surged 19.9%, beating analysts' estimates by $800 million and showing an acceleration over Q1's 17% growth rate and even Q4 2018's 19.7% growth.

It appears Amazon just can't satisfy everybody, with yet another lukewarm reception to its earnings report. Still, there are a few elements of Amazon's business that will be worth watching.

The return of e-commerce

Part of the reason for Amazon's slowing growth over the past year has been the maturation of its massive online store segment (its largest unit by revenue). However, online stores accelerated by 16% in constant currency last quarter, compared with Q1's 12% growth, marking the highest growth rate for this segment in a year and a half. Third-party sales, a smaller segment by revenue but a more profitable part of e-commerce, also saw its top line accelerate, from 23% in Q1 to 25% growth in Q2.

The reason is likely the recent introduction of one-day shipping for Prime members, which also led to a hefty 36% growth in shipping costs and commensurate declines in North America and International segment profitability.

Despite the profitability hit and post-earnings sell-off, at least one stock watcher is cheering the move. Analysts at J.P. Morgan wrote earlier this month, "We expect the Amazon narrative to shift back more toward top-line growth in the second half of 2019, which in our view is important as Amazon remains a growth story and it's too early for the company to be in harvest mode" (emphasis mine). After earnings, the same analysts applauded the quarter, saying that "the AMZN narrative has shifted back more toward top-line growth in 2019 as we expected, but the magnitude of acceleration and accompanying investment spend are both bigger than we projected."

What's up with AWS?

One fly in the ointment for the current earnings report -- either real or perceived -- was Amazon Web Services, which showed both decelerating growth and increased investments. The cloud platform grew "just" 37%, down from 42% in Q1, and its operating profit margins fell from 28.9% in Q1 to a still-impressive 25.3% in Q2. Are these numbers reason to worry, or is Amazon embarking on another heavy investment cycle to boost AWS growth?

Two things to note about AWS. First, on revenue, the company was lapping a blowout quarter from one year ago, when revenue growth accelerated from 48% to 49%, with some "particular unique customer volumes that were flowing through," according to CFO Brian Olsavsky.

With challenging comps, along with the fact that AWS is a massive $33 billion run-rate business, I wouldn't necessarily panic about 37% growth. Critics will point to the fact that Microsoft's ( MSFT -1.97% ) Azure platform grew at 68% in constant currency in the same quarter. However, that also marked a deceleration from the 75% growth in Microsoft's previous quarter, a 7-percentage-point deceleration, and Azure is far smaller than the leader AWS. Microsoft also doesn't disclose Azure's total revenue or profitability, as opposed to Amazon, which has disclosed these numbers for its cloud platform since 2015.

And if Amazon's heavy spending usually leads to strong or accelerating growth, investors should be pleased. On the conference call with analysts, CFO Brian Olsavsky pointed to heavy investments in the AWS sales force, part of the company's massive 48% rise in marketing costs. Olsavsky also mentioned that the company's Alexa and AWS technical headcount grew at twice the rate of the company's overall headcount, meaning Amazon is investing heavily in AWS while still making 25% operating margins.

So while some may fear that the AWS "slowdown" and decrease in profitability are a sign of better competition, I wouldn't panic about it just yet. As Amazon has shown, its investments usually pay off, though investors may not see it immediately, as they did with one-day shipping.

Up is down, down is up

Amazon's business units switched narratives last quarter, as did the company's revenue growth versus its profitability. While the e-commerce giant's reaccelerating spending may have caused some near-term investor indigestion, I still think all is right in the world of Amazon.