Rite Aid (NYSE:RAD) and CVS Health (NYSE:CVS) are two of the largest retail drugstore chains in the U.S. Both face near-term and long-term challenges that have caused Wall Street to toss their stocks into the discount bin.

Which of these two is the better choice for new money? Let's put them to the test. 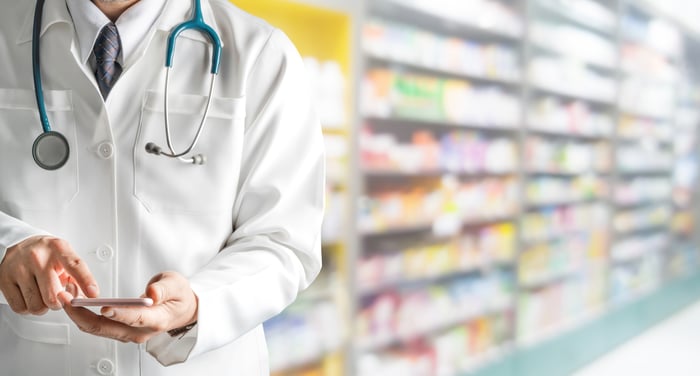 Rite Aid's numbers haven't headed in the right direction for many years. It has had a hard time competing in a changing retail pharmacy landscape, and the recent entry of Amazon.com isn't making things any easier.

The relentless competitive pressure has caused revenue to take a hit in recent years, and profitability has completely disappeared. 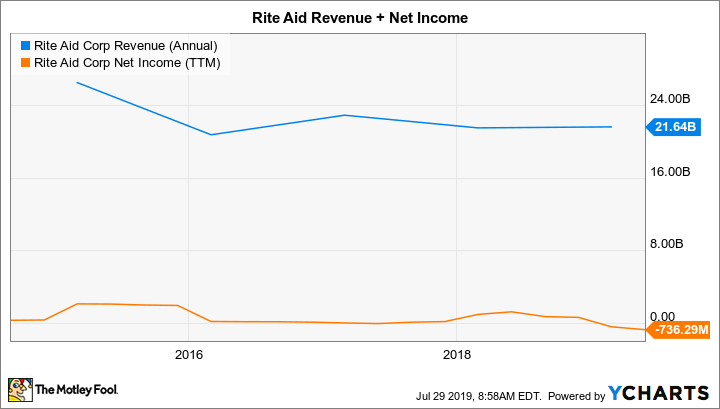 While the company has made numerous attempts to right the ship, including trying to sell itself to its rival Walgreens Boots Alliance (NASDAQ: WBA), those moves haven't translated into sustained revenue growth or a return to profitability.

Wall Street doesn't believe the situation is going to improve anytime soon. The current estimate is that Rite Aid's sales are going to decline slightly this year and next year, and the bottom line will remain in the red. In other words, don't expect growth from this company anytime soon.

It's a different story for CVS Health. While the company has faced many of the same competitive pressures as Rite Aid, CVS Health has gone on the offensive to help produce growth. Its biggest move was the $70 billion acquisition of the health insurer Aetna, intended to help diversify its business away from its dependence on pharmacies. The company is still digesting the acquisition now, but management has promised big cost savings down the road.

When combined with its other growth initiates, Wall Street believes CVS will grow its profits by 3% annually over the next five years.

I wouldn't classify either of these businesses as "growth" stocks right, but CVS Health at least promises to improve its bottom line. You can't say the same for Rite Aid.

CVS Health and Rite Aid have badly underperformed the S&P 500 over the last five years. The upside of these dreadful returns is that both of these stocks trade at dirt-cheap valuations:

Rite Aid is generating losses right now and is expected to do so next year. That's why it doesn't even have a P/E ratio. But its price-to-sales ratio of just 0.02 is very telling about how Wall Street values this business right now.

CVS Health trades at a much higher price-to-sales ratio than Rite Aid, but that's partly because the company is profitable. What's more, its forward P/E of 7.4 is incredibly low, especially compared to the average constituent of the S&P 500.

Both of these stocks are cheap right now, but I have a hard time calling Rite Aid a value given that its bottom line is dripping with red ink.

CVS Health likes to return cash to shareholders; it does so primarily through stock buybacks and a growing dividend.

Here's a chart showing just how effective its actions have been: 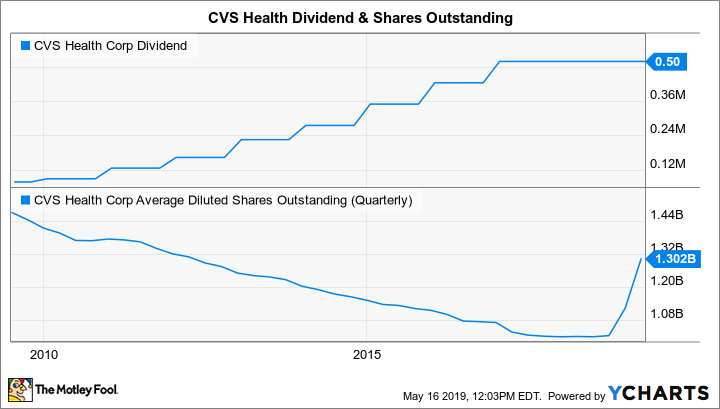 CVS Health's growing dividend has combined with a collapsing share price to create a solid yield of 3.6%. That's nearly twice as high as the average company in the S&P 500.

You probably noticed that CVS Health's share count spiked recently. The jump is directly attributable to the Aetna buyout, and it reversed a few years of buyback activity. That's not great news, but the long-term trend clearly shows that CVS Health can buy back its stock in a high-enough quantity to reduce its share count over time. 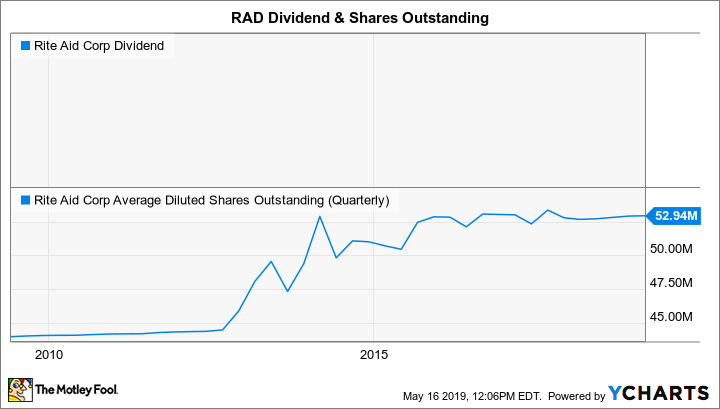 You can see that Rite Aid doesn't pay a dividend at all and that its share count has trended higher over time. What's more, the company enacted a 1-for-20 reverse stock split recently, which isn't something strong companies do.

This category is another easy call: CVS is the clear winner.

CVS came out ahead in all three categories, so it gets my vote as the winner of this match. But neither of these businesses interests me all that much right now. I'm not a big fan of investing in companies that are heavily dependent on acquisitions to drive growth. I also do not like the fact that Amazon has taken such an interest in the pharmacy industry.

Value investors might do just fine with either of these stocks today, but my personal plan is to focus my capital on companies with better organic growth prospects.