Educational content provider Chegg's ( CHGG -1.35% ) second-quarter 2019 earnings report demonstrated that its suite of learning tools, Chegg Services, which encompasses live and video-based tutorials, artificial intelligence (AI)-powered writing and math aids, question-and-answer knowledge databases, and other services, still enjoys growing demand among high school and college students. Released on Monday after the close of trading, the company's filing also illustrates its slow but steady progress toward profitability by generally accepted accounting principles, or GAAP. As we dig into the quarter below, note that all comparative numbers are presented against those of the prior-year quarter. 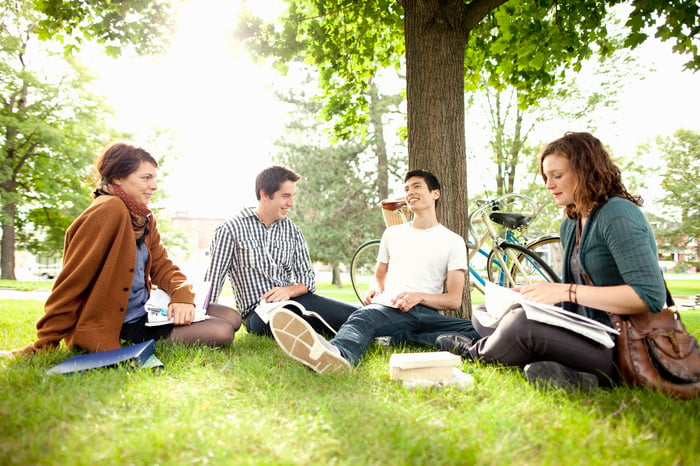 In prepared remarks during the earnings conference call, Chegg CEO Dan Rosensweig outlined the importance of the flagship service Chegg Study to the company's growth prospects, as well as the offering's competitive advantages and near-term focus:

Chegg Study remains our largest service and serves as the center of our growth funnel. It provides students with the essential support through their academic journey and does so online, with high-integrity content, in multiple formats, and meets them at whatever academic level they are at...We continue to expand the subject matter we cover, thereby increasing the number of students who can use the platform. Our library of content now has a record 30 million proprietary, expert answers and textbook solutions, which has doubled in just the last two years.

It's not only the amount of content but the quality of content, that drives our value, as is evidenced by the 200 million pieces of content students accessed via Chegg Study this quarter. And video is becoming a much more important component of our learning services, along with the addition of practice test problems. For the second half of this year, we will continue to expand the amount of video content we offer and increase the categories of practice and self-assessment capabilities, so students can better understand where they need help to be successful in their courses.

As is customary, Chegg provided investors with a financial outlook for the following quarter. The company anticipates third-quarter revenue of $88 million-$90 million, and it aims to achieve a gross margin of 74%-75%. Management expects that adjusted EBITDA will land between $19 million and $20 million.

Chegg also raised full-year guidance, upping its revenue projection to $398 million-$402 million, against a prior band of $393 million-$398 million. The organization's full-year gross margin target remains at 76%-77%, while adjusted EBITDA is now projected at $121 million-$123 million, versus the prior $117 million-$120 million range. Shareholders likely grasp the company's high probability of hitting these full-year targets: Including this quarter, Chegg has now raised its own forward guidance for 10 consecutive quarters.

1 Number Investors Might Be Overlooking From Chegg's Q3 Report

Here's What Investors Should Know Heading Into Chegg's Q3 Earnings