Slowing sales are never a good thing, but this overlooked metric provides a silver lining for GM.

Anyone who has sat through countless marketing meetings over the years will tell you how important sales are: Everything starts with sales. With that mindset, General Motors ( GM 5.10% ) investors might be apprehensive heading into the company's second-quarter earnings call on Thursday, given its quarterly, and full-year, sales declines.  But there is one key factor that should help investors sleep at night despite these declines.

Before we get to the good news, let's pump the brakes on all the pessimism and put some context around GM's sales decline. Yes, General Motors' U.S. sales are down 4.2% for the first half of the year, but the company's second quarter was actually an improvement, with only a 1.5% decline. Furthermore, that decline wasn't nearly as bad as that of some of its closest competitors. Ford, Honda, and Nissan posted declines of 4.1%, 4.3%, and 3.7%, respectively, during the second quarter. Total U.S. light-vehicle sales declined 1.7% during the second quarter, suggesting that GM, despite its decline, performed better than the industry as a whole. All in all, it wasn't a bad result.

Beyond GM's overall sales decline, the sales mix was a bright spot. As investors likely know, in late 2018 GM made a big decision to end the production of six passenger-car models -- these vehicles have been notoriously less profitable for Detroit automakers. The decision to cut production of passenger cars goes hand in hand with its renewed focus on accelerating sales of highly popular SUVs, crossovers, and pickup trucks. So far, so good: Sales in those three segments could carry the company's second-quarter top and bottom lines higher, even with the sales decline. 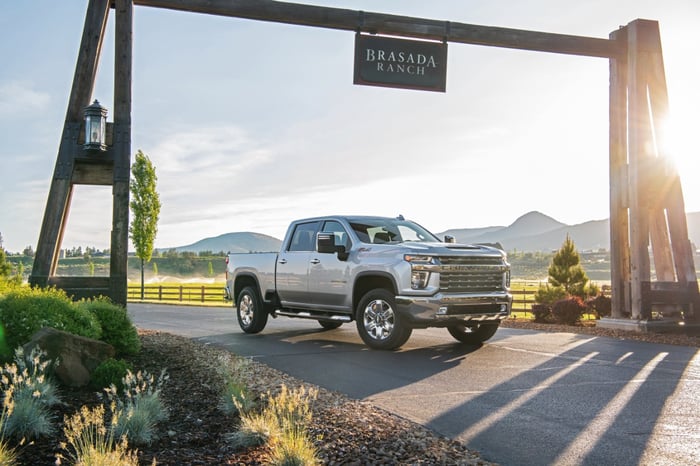 GM's crossover sales were a bright spot, setting a second-quarter record as sales spiked 17% year over year. Sales of GM's highly profitable "crew cab" version of the Chevrolet Silverado and GMC Sierra were up 12% compared to the prior year -- the crew cab accounts for roughly 75% of its light-duty truck sales currently. The Chevrolet Equinox, Traverse, and GMC Canyon also posted second-quarter record sales. Sales of every Buick crossover were up year over year, and Cadillac crossover sales were up 19% compared to the prior year. Not to be left behind, GM's larger truck-based SUVs also had strong gains, with the Tahoe, Suburban, and Yukon XL all up more than 20% from the prior year.

What does all of this mean? Essentially, the sales mix shifting to an SUV-, crossover-, and truck-heavy mix will boost average transaction prices and margins -- bigger vehicles are loaded with premium features and simply sell for a higher price tag. In fact, one key reason investors should remain optimistic despite a sales decline is GM's average transaction prices (ATPs). GM's ATPs, a figure net of incentives, increased $1,575 from the prior year to a juicy $37,126, according to J.D. Power PIN figures. (Industry ATPs are a more modest $33,681.) Furthermore, GM's average incentive spending as a percentage of ATPs declined during the second quarter from 13.4% to 12.6%, which bodes well for profitability.

Heading into the Q2 earnings call

Sure, investors would prefer GM's second-quarter sales to have moved higher rather than declined, but its "crew cab" models are rolling out of the dealerships in good numbers, and sales of its more profitable crossovers and SUVs are doing well. The company's ATPs are up and at a juicy level, and the company's incentives as a percentage of those ATPs are declining. All of those factors should prevent GM from stalling during its second-quarter earnings report.