Please ensure Javascript is enabled for purposes of website accessibility
Free Article Join Over 1 Million Premium Members And Get More In-Depth Stock Guidance and Research
By Asit Sharma - Jul 31, 2019 at 9:57AM

The aircraft-leasing leader generated a surprisingly ample profit in the second quarter, and investors responded in kind.

AerCap ( AER 3.21% ) reported record earnings per share in its second-quarter 2019 score card released on Tuesday before the markets opened for trading. The world's largest owner-lessor of aircraft coupled higher lease revenue with expenditure reductions in key line items to produce an appreciable jump in net earnings. Shareholders rewarded the leasing giant with an 8% bump in shares in the Tuesday trading session.

As we dive into the quarter's details below, note that all comparative numbers are presented against those of the prior-year quarter.

What happened at AerCap this quarter? 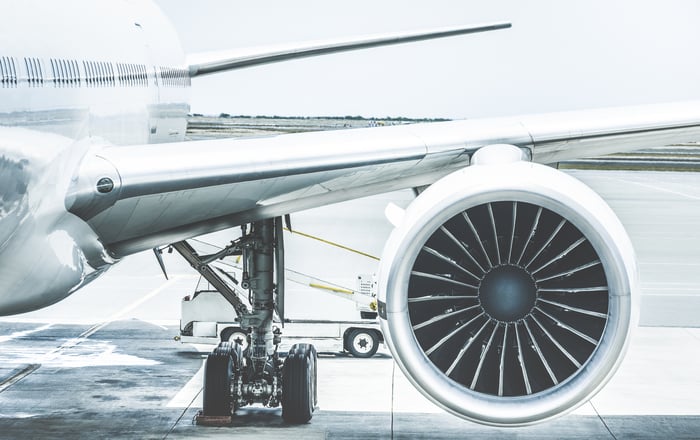 During AerCap's earnings conference call, CEO Aengus Kelly provided a rationale behind the organization's preference in recent years for new-technology aircraft, as opposed to the current-technology market, which perhaps exhibits broader customer demand:

AerCap's practice of selling older, current-technology planes while investing in new-technology models is being undertaken while the company's stock continues to trade at a discount to book value. Thus, while it enhances the quality of its asset portfolio, AerCap sees inherent value in repurchasing its own shares at a discount on the open market. The company's $337 million of shares repurchased so far this year were bought at an average discount of 29% to book value. In June, AerCap's board authorized another $200 million in the organization's share repurchase program.

Even after Tuesday's price appreciation, AerCap's stock still trades at a discount of 18% to book value. This is an ongoing opportunity recognized by both the company and long-term investors who are able to weather the cyclicality of the aircraft leasing industry.

Why AerCap Stock Is in a Freefall Today