Amidst the bustle and noise of a long-term bull market, it's easy to lose sight of companies that are making their shareholders richer. So you might have missed several that are putting a few more coins directly in shareholder pockets.

I'm talking about dividend raises, of course. These three were recently announced, though they haven't kicked in yet -- so there's still a chance for new shareholders to take advantage. 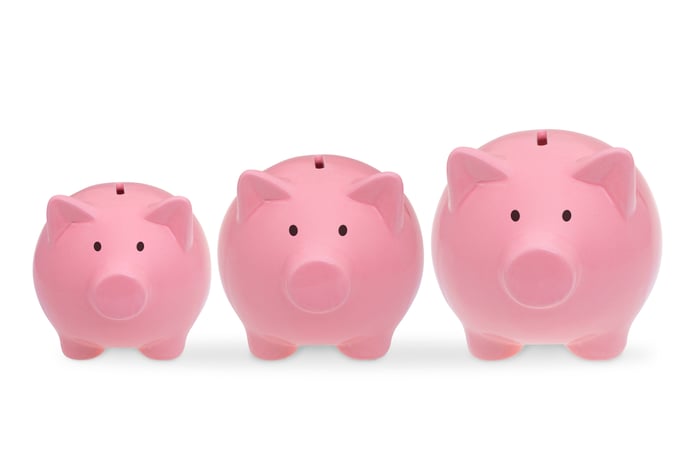 The recent champion of consumer goods-sector dividend raises has to be Kroger (NYSE:KR). The grocery chain operator has lifted its quarterly payout by a generous 14%, and it now yields just under 3%.

Why the hefty raise? In the press release announcing it, the company implied that Restock Kroger, the transformation initiative aimed at modernizing and refreshing the brand, has been a success. Objectively speaking, the company hasn't grown spectacularly under the program -- its most recent quarterly adjusted revenue growth rate was 2% -- but it's routinely profitable and a good cash generator.

Meanwhile, this hike represents the 13th year in a row Kroger has raised its dividend, and management has explicitly stated that shareholder returns will continue to be a major use of its cash flow. The company has more than enough of the green stuff to take care of this double-digit lift, and I'd wholly expect that raise streak to continue.

Kroger's freshly raised quarterly dividend is $0.16 per share, which is to be paid on Sept. 1 to stockholders of record as of Aug. 15.

While we're strolling the supermarket aisle, let's take a look at jam and jelly maker JM Smucker (NYSE:SJM). Like Kroger, it's an old pro at the grocery game and, as such, basically a slow-growing income stock. That income just got a 4% boost, with the quarterly dividend being bumped to $0.88 per share from $0.85. This is the 18th annual raise in a row for the company.

Of course, it isn't likely that consumers will suddenly discover the joys of jam and start buying significantly more of Smucker's signature product line. So the company has gone the acquisition route of late, strengthening its presence in the fast-growing pet food segment with the 2018 purchase of Ainsworth Pet Nutrition for $1.9 billion.

That acquisition isn't cheap, but it's already helping the company's fundamentals. With Ainsworth in its portfolio, Smucker posted a 7% year-over-year gain in net sales in fiscal 2018. Without the unit, the company would have posted a decline on the top line, but only slightly. Adjusted net profit rose by 4% for the year.

Smucker's cash flow is robust; if managed well, the Ainsworth buy will eventually bolster it even more. Smucker's new $0.85 per-share payout is to be distributed on Sept. 3 to shareholders of record as of Aug. 16; it would yield 3.1% at the current stock price.

Of the three dividend raisers in this article, Walgreens Boots Alliance (NASDAQ:WBA) is the steadiest and most reliable. In fact, it's a Dividend Aristocrat, one of the few S&P 500 stocks that has lifted its distribution at least once annually for a minimum of 25 years running. It recently extended its streak to 44 years with a 4% lift in its quarterly payout to just under $0.46 per share.

Walgreens hasn't been an investor favorite in recent months due to a rather bad second quarter, though the company's following quarter was far better. Compounding this was the entry of all-around-scary competitor Amazon.com to the pharmacy sector with its 2018 acquisition of PillPack.

Yet there will likely still be plenty of business for all pharmacists, since the proportion of older Americans -- who typically require more medication than the young -- is increasing, and will likely continue to do so. Plus Walgreens is so well established as a neighborhood pharmacy throughout America that it's nearly an institution. That aforementioned Q3 earnings report indicates that the company is at least holding its ground.

Walgreens will pay its next dividend on Sept. 12 to investors of record as of Aug. 20. The raised payout yields 3.3% at the most recent closing stock price.