Shares of laboratory equipment manufacturer NanoString Technologies (NASDAQ:NSTG) have soared 121% since the beginning of the year. The main catalyst hasn't been improving financial performance, but rather anticipation for a new product launch: the GeoMx Digital Spatial Profiler (DSP). The new platform became commercially available in late March, which meant the second quarter of 2019 was the first full quarter to scoop up sales.

How did it go? NanoString Technologies counted 55 orders for the GeoMx DSP at the end of June, which are expected to start shipping in the third quarter of 2019. That's a strong start for the new platform. Meanwhile, the legacy nCounter Analysis system saw its installed base increase by 30 during the quarter -- giving it an average of 30 net additions each quarter for the last year.

The business didn't inch any closer to profitability during the first half of 2019, but investors are still hoping the GeoMx DSP platform can change that when it begins generating revenue in Q3. Here's what investors need to know. 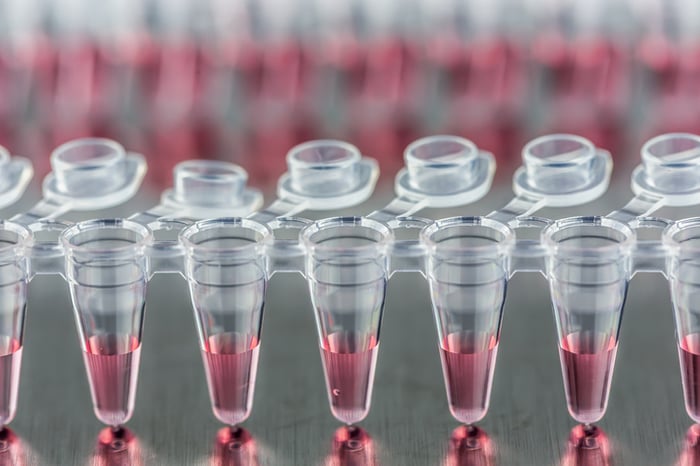 In the first half of 2019, NanoString Technologies reported a 13% year-over-year increase in total product and service revenue, which includes sales of instruments (not the GeoMx DSP), the chemical instruments needed to run them (called consumables), diagnostics, and services. The business also reported a 48% increase in collaboration revenue in that span, which pushed total revenue growth to 21% in the comparison period. Collaboration revenue can be a little choppy, however, so investors should focus on product and services.

Unfortunately, all of that growth on the top line was gobbled up by increases in operating expenses. Total revenue increased by roughly $10 million in the first half of the year compared to the year-ago period, but that was more than offset by a $12.5 million increase in total costs and operating expenses. The increase was primarily related to the launch of the GeoMx DSP and research and development (R&D) related to the next platform in the equipment pipeline, the Hyb & Seq, expected to launch in 2021.

Investors might be willing to stomach that trend so long as new product launches live up to the hype and deliver profitable growth, although it will take at least several more quarters before an accurate assessment can be made. NanoString Technologies certainly has its work cut out for it.

The nCounter Analysis System, simply called the nCounter, allows scientists to better understand gene activity within a biological sample. It ended June with an installed base of 790 instruments globally and has been used in more than 2,650 peer-reviewed publications to date, marking sequential increases of 4% and 6%, respectively.

That's a healthy installed base, which packs quite a punch when it comes to generating recurring revenue from the sale of consumables. Case in point: instruments revenue declined 9% in the first half of 2019 compared to the year-ago period, but consumables revenue increased 22% in that span. Therein lies the value of any lab equipment manufacturer's strategy to build multiple instrument platforms.

After nCounter comes the GeoMx DSP, which will start shipping and generating revenue in Q3 2019. The new system is similar to the nCounter, but it provides scientists with the ability to understand how gene activity and protein levels vary across different regions of a sample. It's expected to serve a fast-growing niche in immuno-oncology R&D, as evidenced by the 55 committed orders through the end of June.

The GeoMx DSP should provide a boost to overall instrument sales starting in Q3, but investors should be more interested in what the new instruments provide in terms of consumables pull-through. The inherently high-margin, recurring revenue stream is what will ultimately help NanoString Technologies achieve profitable operations. It just has to reach the appropriate scale -- and be matched by disciplined pruning of operating expenses.

Management expects the business to continue its steady march toward higher scale in the second half of the year. Full-year 2019 guidance calls for:

As full-year 2019 guidance makes abundantly clear, investors will be wading through red ink for the foreseeable future. If the launch of the GeoMx DSP doesn't inject the expected growth into the business in 2020, and operating expenses can't be reeled in to acceptable levels, then it won't matter how many instrument platforms are commercialized. Right now, all investors can do is continue waiting and hope the latest product launch delivers.