Global hospitality giant Hyatt (NYSE:H) boosted revenue in the second quarter by double digits through a mix of core and acquired growth in total portfolio rooms. Results released Wednesday capped a solid first half of 2019, in which the hotelier's top line expanded over the comparable 2018 period by nearly 13%. However, management also noted isolated construction issues that will impact results in the back half of the year, dampening full-year adjusted earnings guidance. As we review headline numbers and critical details from the last three months below, note that all comparable numbers refer to those of the prior-year quarter.

What happened with Hyatt this quarter? 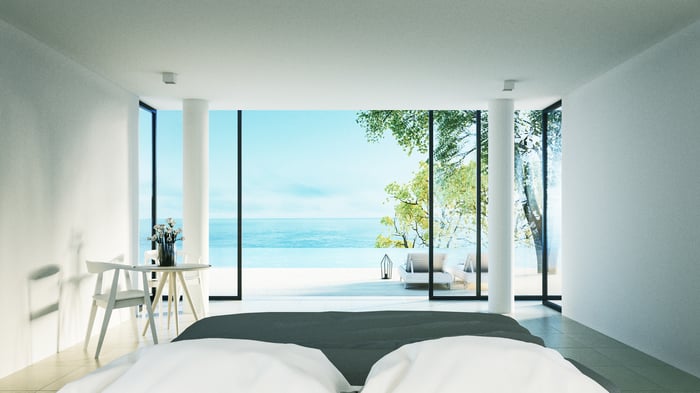 In Hyatt's earnings press release, CEO Mark Hoplamazian highlighted progress during the quarter while advising investors of a revision to the company's full-year guidance:

We reported solid second-quarter results. Strong transient demand drove 1.3% systemwide RevPAR growth, and fees and net rooms grew at a double-digit pace inclusive of the Two Roads Hospitality LLC acquisition. We expect the key drivers of growth across our lodging business to continue to drive results within the context of our reduced RevPAR guidance. Separately, we are reducing expectations for full-year Adjusted EBITDA to primarily reflect construction-related issues in our Miraval business, as well as increased transaction adjustments and foreign currency headwinds.

Hoplamazian also noted a positive revision to one portion of Hyatt's outlook due to the vigorous room expansion chalked up through the first half of the year:

We continued to expand our portfolio at a solid pace in the second quarter. Developer demand for our brands remains strong with our base of executed contracts for future openings increasing by 1,000 rooms in the quarter net of opening of nearly 4,000 rooms. Based on this development activity and an increase in conversions of hotels to our brands we now expect to grow net rooms by 7.25% to 7.75% this year as compared with our prior expectation of 7% to 7.5%.

As Hoplamazian alludes to above, Hyatt has reduced its full-year guidance range for adjusted EBITDA from $780 million to $800 million to a new band of between $755 million and $775 million. Two-thirds of the $25 million reduction at the midpoint of each range stems from construction issues at two Miraval (a wellness resort brand) properties, in Lennox, Massachusetts, and Austin, Texas. The sale of the Grand Hyatt San Francisco and reassignment of the Apple lease will account for additional $5 million in decreased EBITDA, with the balance of approximately $3 million attributed to foreign currency translation.

The company also tightened its expected year-over-year RevPAR growth rate for 2019 to a range of 1% to 2%, versus a prior expectation of between 1% and 3%. This should be seen by shareholders as mostly an adjustment of precision, as Hyatt has higher visibility into both occupancy trends and average daily room rates with two quarters remaining in the year.