Shares of Kellogg (NYSE:K), a leading producer of consumer packaged foods including cereals and snacks, had risen by almost 10% as of noon Thursday after the company released better-than-expected second-quarter results.

Starting from the top, Kellogg's total net sales increased 3% to $3.46 billion during Q2, which exceeded analysts' consensus estimate of $3.41 billion. Management noted that the sales growth derived from broad-based organic growth, but on the bottom line, the company failed to meet analysts' estimates. Kellogg's net earnings checked in at $286 million, or $0.84 per share, which was well below the prior year's $596 million, or $1.71 per share, and lower than analysts' consensus estimate of $0.92 per share. Much of that decline was related to restructuring and divestment costs incurred when Kellogg sold Keebler biscuits and other assorted brands for $1.3 billion in April. 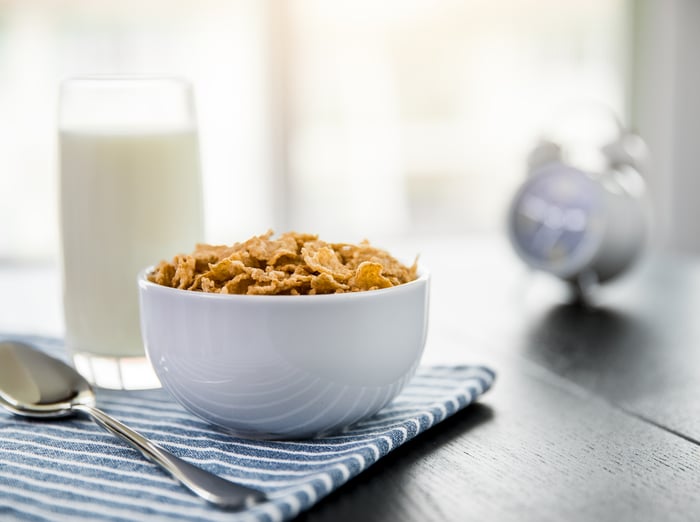 "This was another quarter in which we progressed solidly against our strategy and our 2019 plan, providing further, tangible evidence that Deploy for Growth is working," said Chairman and CEO Steve Cahillane in a press release. "We delivered another quarter of net sales growth, featuring more and better innovation, momentum on revitalized snacks brands, better price realization, and continued expansion in emerging markets."

Last quarter's sales growth was good news for investors who had bet that Kellogg would emerge from its divestitures with a better focus on core brands, an improved growth outlook, and higher profit margins. Management will continue to realign its business with changing tastes and consumers' increasing desire for healthier snack options. Assuming that Kellogg can continue to innovate products that drive organic sales growth, its stock looks intriguing, as it now trades at a modest 14 times earnings and offers a dividend that yields just under 4%.