Helping customers move their products from place to place is the bread and butter of XPO Logistics (NYSE:XPO), and the rapid adoption of e-commerce has created new logistical challenges that present opportunities to XPO and its peers. Yet a fast-changing industry has also threatened to disrupt XPO's core business, and that has many investors nervous about the future for logistics companies.

Coming into Thursday's second-quarter financial report, XPO investors were prepared to see flat sales and earnings. However, XPO wasn't even able to meet that relatively low sales hurdle, and falling revenue balanced against rising profit in a way that shareholders found difficult to parse out. 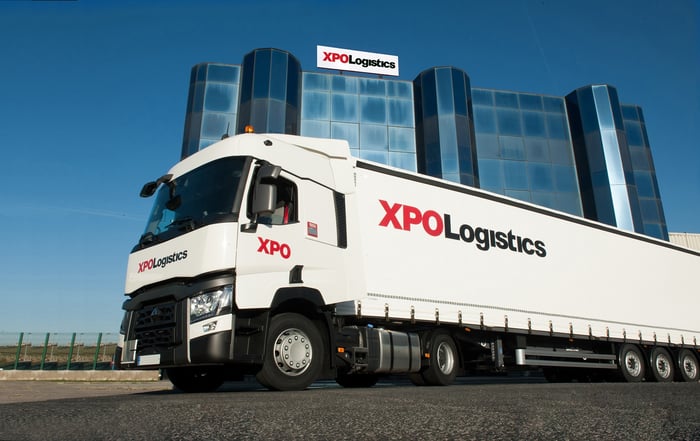 XPO Logistics' second-quarter results continued a troubling trend of weaker top-line performance. Revenue was down 3% to $4.24 billion, which compared unfavorably with the flat revenue levels that most of those following the stock were expecting. Adjusted net income was also flat at $132 million, but a big drop in share count led to adjusted earnings of $1.28 per share, easily topping the $1.04 per share that investors were looking to see.

The logistics segment contributed better revenue growth for XPO. Segment revenue was higher by a bit over 1%, with organic revenue growth coming in at 4.8%. Strength in food and beverage, consumer packaged goods, aerospace, and healthcare in North America all lifted XPO's results. However, the loss of some business from XPO's largest customer weighed on that segment's performance, and pre-tax adjusted operating earnings were up just 1.5% year over year.

By contrast, the transportation unit suffered a decline of about 5% in revenue. Reduced freight brokerage and postal injection business from its largest customer hurt XPO, as did lower truckload rates. Some gains in the North American less-than-truckload and managed transportation markets weren't enough to pick up the slack. Yet adjusted pre-tax operating earnings saw solid gains of about 8%.

CEO Brad Jacobs was generally upbeat about XPO's performance. He pointed to strong results in earnings, free cash flow, and adjusted pre-tax operating earnings as being instrumental to XPO's success, and he pointed to rising margin and yield figures in key parts of its business.

Can XPO hit the gas?

XPO has high hopes for the future. Innovations in the North American less-than-truckload market should help the company see improving profit in the near future. Some tools to improve workplace productivity have the potential to boost results at nearly 300 less-than-truckload centers across the U.S., and some additional tools for tracking items like pricing, route optimization, line-haul efficiency, and yard management show promise for helping clients further.

Yet the moves that XPO made in its full-year 2019 guidance were mixed. On one hand, the company now believes that revenue growth will come in at between -1% and 1% for the year, down by four percentage points from its previous 3% to 5% range. Organic revenue growth will similarly see about a three percentage point decline from its previous range, with the new guidance expecting 2.5% to 4.5% growth. XPO sees weaker truckload rates in freight brokerage as hurting the company's results. However, XPO boosted adjusted pre-tax operating earnings expectations by $25 million to a new range of $1.675 billion to $1.725 billion. It also expects $50 million more in free cash flow, setting guidance at between $575 million and $675 million.

XPO investors seemed to react favorably to the news, and the stock moved up by nearly 2% in after-hours trading following the announcement. XPO's moves to bolster its performance aren't all delivering immediate and clear results everywhere, but it's still good to see the company's bottom line get a nice boost to confirm that its efforts are paying off.