McDonald's (NYSE:MCD) just posted some of its best comparable sales numbers in five years, but franchisees are getting restless because customer traffic hasn't returned to the fast-food chain. Price hikes and product mix accounted for the burger chain's impressive growth this quarter, but getting customers back in the door remains a challenge.

The National Owners Association, a group representing McDonald's franchisees, offered a list of improvements the restaurant can make to its menu, including getting rid of the $1 any-size drink promotion and eliminating the constant discounting, because it is hurting franchisees' bottom line.

But the item it believes will have people clamoring to get into the restaurant again is "a world class Chicken Sandwich" that can rival Chick-fil-A's offerings. 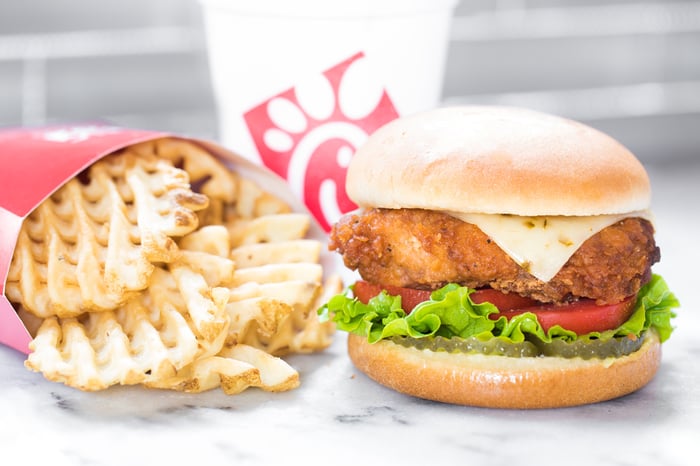 There's good reason the chicken joint is the target of their attention. It's become the third-largest fast-food restaurant by sales this year, hurtling past Wendy's and Burger King to topple third-place Subway because its chicken sandwich sits at the apex of quality fast food.

Unfortunately, simply replicating a Chick-fil-A sandwich won't win back customers for McDonald's. Beyond just having delicious food, Chick-fil-A tops the favorite-restaurant lists of so many people, including teens (who perennially rank it ahead of Starbucks, Chipotle Mexican Grill, Dunkin, and McDonald's), because its customer service is top notch. It is always quick and always friendly, and the order is almost always accurate.

Chick-fil-A was named the leading limited-service restaurant in the country for the fourth year in a row on the American Customer Satisfaction Index with a leading rank of 86 (shockingly down one point from last year), which put it well ahead of the competition.

When "all others" come in second with a score of 82, ahead of third-place Panera Bread with an 81 rating, you know the industry has a customer service problem. And McDonald's has a bigger one than most as it came in dead last -- again -- with a score of 69.

Further, a survey last year of drive-thru window order accuracy found Chick-fil-A with near perfection, getting orders right 97.3% of the time. McDonald's did fairly well with 92.7% accuracy, but still placed third behind Arby's.

Which is why McDonald's franchisees' move for a premium chicken sandwich to win back customers is so misguided. Eliminating $1 drinks and the $1 $2 $3 Dollar Menu may help boost the bottom line of franchisees, but those promotions were introduced precisely to help drive traffic.

Although guest counts fell again in the latest quarter, the discounting may be what is keeping the customers McDonald's does have coming in right now. What McDonald's needs to do is work more on its employees, rather than its menu.

Perhaps one thing McDonald's could learn from Chick-fil-A's menu is to do one thing and do it well.

Chick-fil-A essentially just makes chicken sandwiches. A customer has just seven chicken sandwiches to choose from on its entree menu, three different nuggets, and a chicken wrap. McDonald's menu is much more expansive. There is a smorgasbord of selection, from burgers and chicken to the Filet-O-Fish sandwich and all-day breakfast items.  It really needs to make its menu simpler.

More important than a chicken sandwich

While a premium chicken sandwich might help, as NOA pointed out, McDonald's Chicken McNuggets and the McChicken sandwich are already very good products. What they're really looking for is a sandwich that they can mark up to boost profits, and that won't necessarily boost store traffic.

McDonald's actually has a long history of adding premium items to its menu and causing the opposite effect. Arguably they might not have been the right products, but until McDonald's frontline employee attitudes change and customers receive a more welcoming experience, it probably won't matter what's on McDonald's menu.

Getting back to McDonald's roots of making good, tasty, and affordable burgers might do more to increase traffic than adding yet another sandwich to the menu, let alone a premium that has pretensions it can rival Chick-fil-A's.