Not everything in the stock market was bad on Monday -- here are two companies that are gaining in post-market trading.

For the stock market, today's trading hours were gloomy and awful. For some companies, though, the sky got a little brighter after market close thanks to encouraging quarterly results.

I'm referring in particular to video game producer Take-Two Interactive (TTWO -2.67%) and better burger joint Shake Shack (SHAK 2.52%), both of which reported after the clang of the market's closing bell. Here's how they did. 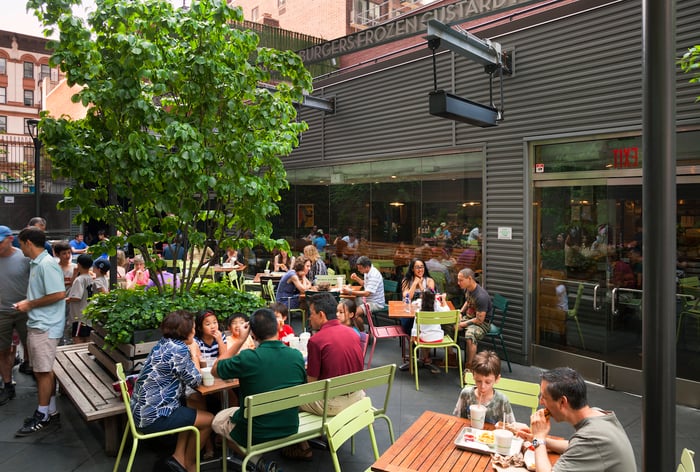 Take-Two has gotten off to a roaring start in its fiscal 2020, delivering a Q1 net profit that well exceeded prognosticator predictions.

On average, analysts were estimating that Take-Two's bookings for the period would be $364 million, with adjusted EPS landing at only $0.02.

During the quarter, Take-Two released a full set of games, most of which were the latest titles in long-running series. Its Borderlands: Game of the Year Edition and Grand Theft Auto Online: The Diamond Casino & Resort generally received good reviews, and are proving to be popular with devotees of those franchises.

This fiscal year, the company has a release slate that is nicely balanced between fresh games in existing series and new properties. This should keep the veteran gamers interested, while building cadres of fans of the new titles.

On the back of its overperformance in Q1, Take-Two has lifted its guidance for the entirety of fiscal 2020. The company believes its GAAP net revenue will come in at $855 million to $905 million, and bookings at $860 million to $910 million. GAAP net income should range from $118 million to $130 million.

It isn't easy for a stock to rise after such a terrible day for the market, but Take-Two is bucking the unhappy sentiment and heading north. It's currently up by almost 6% in tonight's trading.

Another stock in positive territory this eve is Shake Shack. On the back of rapid expansion, the fast-casual burger joint operator delivered Take-Two-like revenue growth, boosting its top line by over 31% in its Q2 of fiscal 2019 to land at nearly $153 million. Adjusted net income was down, but only marginally, at just over $10 million ($0.27 per share).

It's revealing, however, that the company's growth in "same-Shack" sales (i.e., those restaurants operating for at least 24 months) crept up by less than 4%.

Expansion has been a key strategic goal, with 19 new restaurants opening during the quarter. Thirteen of these were in the U.S., all but two of which were company-operated (as opposed to licensed). The six located abroad, which include markets like Singapore, Japan, and Russia, are all licensed.

Regardless, Shake Shack exceeded analyst estimates. These followers of the stock were modeling slightly under $150 in revenue for the quarter on same-Shack sales growth of 2% and a per-share adjusted net profit of $0.23.

The company increased its revenue guidance for the full fiscal year, upping it to a range of $585 million to $590 million. It also lifted its estimate for licensed Shack openings, to 18 to 20 from the previous 16 to 18. It slightly tightened its figure for domestic company-operated restaurants (38 to 40, a change from the prior 36 to 40).

Shake Shack has been a durably popular stock through the recent ups and downs of the fast-casual segment. In the wake of the latest results, it's currently trading up by 2%.

Why Take-Two Interactive Could Prove the Bears Wrong