Rising trade tensions were a bad sign for the Chinese discount retailer.

Shares of Vipshop (VIPS -3.24%) were taking a dive today as the Chinese online discount retailer was getting swept up in the broader slide in Chinese stocks as trade tensions flared again. As of 12:44 p.m. EDT, Vipshop shares were down 9.4%.

It was nothing short of a bloodbath in U.S. stocks today as the S&P 500 was down 2.6% in early afternoon, while the tech-heavy Nasdaq was off 3.2%. The Shanghai Composite was off 1.6%. 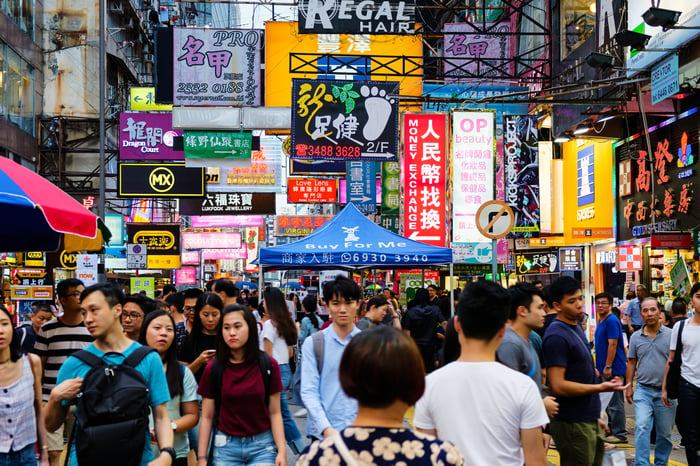 Today's sell-off was prompted by a slide in the Chinese yuan, in response to U.S. President Donald Trump's threats to step up tariffs last week. The Chinese currency reached an 11-year low, at 7 yuan to the dollar, a fall that helps boost Chinese exports amid rising pressures from the trade war.

Like other U.S.-traded Chinese stocks, Vipshop shares fell sharply today; investors are worried about the impact of the trade war on the Chinese economy, as slowing growth in the world's second-biggest economy was already a concern. As a discount retailer, Vipshop has more at risk in a slowing economy or a trade war, compared to other e-commerce companies like Alibaba, which focus more on luxury or high-end goods.

This is far from the first time we've seen the trade war pound Chinese stocks. Last year, the Shanghai Composite lost 25% amid saber-rattling over trade: President Trump slapped tariffs on imports, and threatened to increase import tax rates and expand the categories of products affected, if China didn't bend to the U.S.'s will in areas like intellectual property and anticompetitive practices. The two sides hit an impasse in May when trade talks fell apart, and there's been little progress since.

Vipshop's revenue growth has nearly ground to a halt, amid rising competition in China from creative online retailers like Pinduoduo. Revenue grew just 7.3% in Vipshop's most recent quarter, continuing a long slide. Considering that the company is already struggling to grow, any impact from the trade war will only hurt.