Buy these three companies for a no-stress approach to investing.

Nothing makes life easier for an investor than finding the kind of stocks where you can park money for a long, long time, trusting that they'll deliver solid long-term returns because of a set of a sustainable competitive advantages. These are stocks you can, as we say, "set and forget." They won't keep you up at night, and there's no need to check your portfolio in a sweaty panic when the market suddenly crashes, the way it did earlier this week, on the China trade scare. 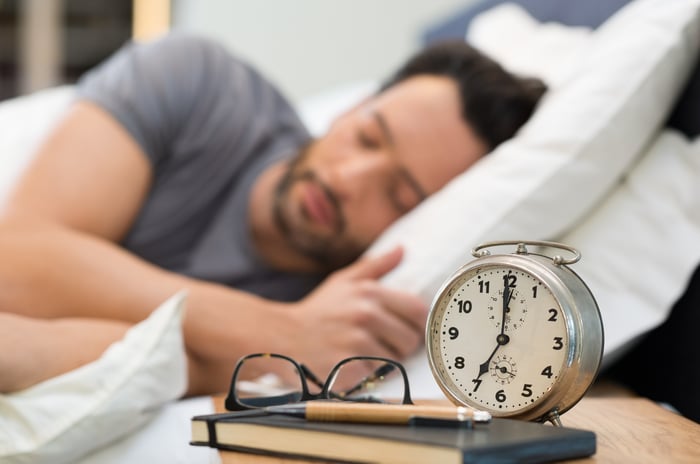 The rare renewable energy stock investors don't have to worry about

Jason Hall (Brookfield Renewable Partners): Despite the massive growth in demand for renewables, many alternative energy stocks have been bad investments. Between the cyclical nature of demand by utility-scale customers, which drive the bulk of global sales, big changes in government subsidies and tax policies, and swings in and out of favor by Mr. Market, renewable energy stocks have proved incredibly -- sometimes painfully -- volatile. Frankly, it can be really difficult to just buy and ignore many of the companies in this segment.

Moreover, I think "setting and forgetting" can cause investors to miss out on golden opportunities to buy the best renewable energy stocks when the market sells off.

Brookfield Renewable Resources, however, is an exception. This solar, wind, and hydroelectric energy producer is perfect for investors of any stripe to buy today, forget they own, and come back in five, 10, or 20 years from now and be very glad they did.

Brookfield Renewable produces and sells renewable energy on long-term contracts. This is a business designed to generate reliable cash flows across any economic environment, and from a diversified collection of assets, both in how they produce energy and where they are located. Moreover, Brookfield Renewable, like its parent, Brookfield Asset Management (BAM 2.55%), has a remarkable track record of capital allocation and business operations. Simply put, these people know how to make money, and how to then reinvest that capital to deliver solid long-term returns.

With a 5.6% dividend yield at recent prices and a long-term history of raising the payout at near-double-digit rates annually, Brookfield Renewable is about as perfect a "set it and forget it" stock as you'll find today.

It doesn't get more consistent than this stock

Sean Williams (Johnson & Johnson): Whether it's a month, a year, a decade, or even longer, there's probably no company more consistent in the earnings column than healthcare conglomerate Johnson & Johnson.

What makes J&J, as the company is more commonly known, such a popular choice among long-term investors is that its three operating segments each bring something unique to the table that its other segments lack.

For example, consumer health products is by far J&J's traditionally slowest-growing segment, and it generates the lowest annual sales of the three. However, pricing power in this segment tends to be strong, and cash flow is highly predictable. Meanwhile, medical devices are growing relatively slowly now, but present a long-tail growth opportunity to cater to an aging global population that's gaining better access to medical care. Lastly, pharmaceuticals represents about half of J&J's annual sales, but provides the bulk of its margins. Branded drugs may have finite patent periods, but between acquisitions, partnerships, and its organic pipeline, J&J has had little trouble growing its pharma operations.

Just how consistent has Johnson & Johnson been? According to the company's 2018 full-year report, the company recorded its 35th consecutive year of adjusted operating earnings growth, and it increased its dividend payout for the 57th straight year in April. And did I mention that it's one of only two publicly traded companies to bear Standard & Poor's highest credit rating (AAA), which is even higher than the U.S. government?

Give your portfolio a long-term buzz

Jeremy Bowman (Starbucks): Few products are consumed by as broad a range of people as coffee. Whether they're rich or poor, old or young, artists or attorneys, they all reach for a cup of Joe when they need an extra productivity boost or just want to share a hot beverage with a friend. Coffee is consumed around the world, and it's so entrenched in the culture that it's hard to see it ever going out of fashion.

No one dominates the global coffee game like Starbucks. Think about it. Who's even No. 2? Dunkin' Brands? Not even close. There's no PepsiCo to this Coca-Cola.

Starbucks has developed an widely recognizable and accessible brand, mastered the concept of creating the "third place," a welcoming locale outside home or work where customers can relax and have a moment for themselves. They've also wisely recognized the power of tools like rewards programs, mobile payments, and digital ordering, developing its app well before other restaurant rivals did.

As a result, Starbucks is nearly as entrenched around the world as coffee itself. Today, the company is worth $114 billion, and still has growth opportunities with its digital initiatives and in China, where the world's most populous country and traditionally tea-drinking nation is just beginning to embrace the bean.

Starbucks has cleverly married coffee and convenience in a way that no other company can match, and the rise of e-commerce and video streaming over the last generation has made one thing clear. Customers are willing to pay a premium for convenience, and their demand and need for Starbucks' products will continue to fuel the company's growth over the decades to come. Delivery and pickup initiatives will only get better as technology improves and the company adds new locations, and China, a nation of 1.4 billion people, is poised to eventually become its biggest market.