The company finally has a drug product on the market, but it didn't live up to Wall Street's expectations in the second quarter.

Clinical-stage pharmaceutical companies are often pretty risky investments, but success isn't guaranteed when the first drug candidate earns marketing approval and launches onto the market. The latest example of that easy-to-forget reality is Kala Pharmaceuticals (KALA 10.56%).

The small-cap pharma wields an intriguing technology pipeline. Its first product, Inveltys, launched in January 2019. Analysts think the eye drug has the potential to reach peak annual sales near $300 million. But shares of Kala Pharmaceuticals have fallen over 65% in the last year -- and second-quarter 2019 operating results only piled onto the stock's woes.

Investors are worried about the chasm between the amount of revenue actually delivered by Inveltys and what Wall Street was expecting. Was it really that big of a deal given the fact that the drug has been on the market for six months? Here's what you need to know about the latest financial report. 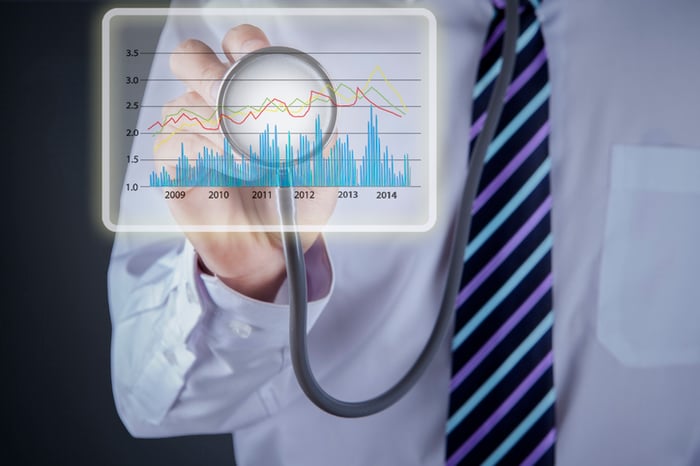 Kala Pharmaceuticals may have graduated to a commercial-stage pharma in 2019, but it will take several quarters or longer before that's readily apparent from a glance at the income statement. The business is still delivering significant operating losses, which have actually widened since last year following a surge in marketing expenses related to the launch of Inveltys.

Of course, analysts and investors aren't too concerned with the red ink right now. The company's short- and long-term success will ultimately be decided by whether or not Inveltys (and another drug candidate) gains market traction. The product is the first and only twice-daily corticosteroid approved for treating post-operative inflammation and pain following surgery. It's based on the mucus penetrating particle (MPP) technology of Kala Pharmaceuticals, which takes advantage of relatively simple materials science principles to more effectively deliver therapeutic compounds into eye tissues.

Unfortunately, Inveltys is either getting off to a slow start or Wall Street analysts are really bad at modeling. The drug delivered Q2 revenue of $2.06 million, whereas analysts had penciled in an average of $2.69 million, according to Yahoo! Finance. That's a relatively large gap, but the bigger issue might be that analyst expectations rise swiftly in future periods. Is Wall Street getting ahead of itself?

Analysts clearly have some pretty big differences in opinion, although it's worth pointing out that the low estimate proved accurate in the most recent quarter. It's also worth pointing out that "low" is relative, as these are estimates made in a spreadsheet. It can be very difficult to predict the trajectory of revenue for a new drug product launched by an inexperienced business.

Management was more optimistic about the drug product's first six months of sales. Kala Pharmaceuticals disclosed that Inveltys prescriptions grew from 11,000 in the first quarter to 31,000 in the second quarter. It ended June with a 6.8% market share and is covered by insurance programs covering 92 million individuals. More insurance decisions are expected in the coming quarters -- and that's not the only decision on the horizon.

Kala Pharmaceuticals should receive a decision from the U.S. Food and Drug Administration on KPI-121 0.25% on Aug. 15. The drug candidate is proposed as a treatment for dry eye disease, which is a significantly larger market than the one treated by Inveltys. Some analysts think it could achieve peak annual sales of $1.9 billion.

But the decision to grant marketing approval isn't so clear cut. In two phase 3 trials, KPI-121 met three of four primary and secondary endpoints, but failed to show a statistically significant benefit in comfort for most patients. It's possible regulators approve the drug candidate for the most severe cases of dry eye disease and require an additional trial before deciding whether or not to broaden the drug's use. Investors are going to have to wait another week to know for sure.

Investors cannot discount the possibility that Wall Street is being too harsh and unforgiving with the launch of Inveltys. The drug has performed relatively well in the first six months on the market. It seems too early to declare the product a flop or begin revising its long-term potential.

That said, investors will need to closely watch the pace of sales growth in the second half of 2019. Kala Pharmaceuticals exited June with $118 million in cash and reported an operating loss of $46.5 million in the first half of the year. If Inveltys strays off course, then the business will be forced to raise more funds by this time next year. And if KPI-121 gets turned down by regulators, then the company's $150 million market cap might be a fair valuation.

How Medical Billing Coverage Spells Success Or Failure For Drugmakers