I spent the past few days checking on some of the theme parks in Southern California, and this follows spending most of last month in the niche's hotbed of Central Florida. Reports of the industry having a rough summer have been circulating for weeks, and with most of the operators being publicly traded companies -- with a lot riding on their gated attractions -- they are allegations that can't be taken lightly. Have theme parks lost their cool when the temperatures heat up?

Summer doesn't technically end for another six weeks, but we may as well be on the cusp of autumn for the theme park industry. Many kids in Florida and California will be returning to school in the next few days, putting an end to the peak travel season. I spent a day at Comcast's (NASDAQ:CMCSA) Universal Studios Hollywood, three days at Disney's (NYSE:DIS) original Disneyland resort, and another day at Cedar Fair's (NYSE:FUN) Knott's Berry Farm. All of those parks trim their operating hours starting next week, so they seem to think that summer's just about over. You're not here for a field trip report, so let's dig into how things look for the three stocks. 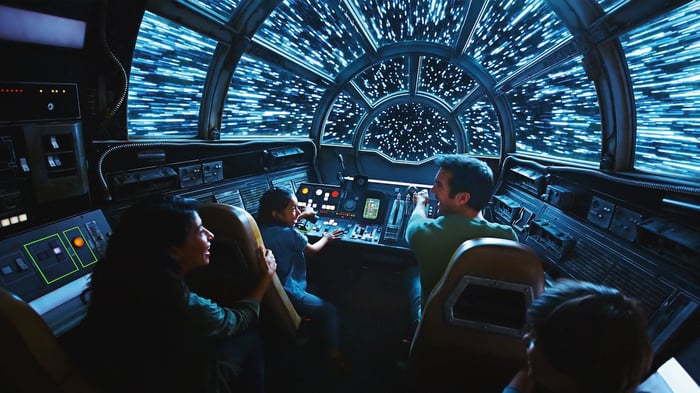 Going back in time

Comcast relies more on cable television and providing internet connectivity than its theme parks, but it's still an important component in promoting its NBCUniversal properties as well as diversifying its operations given the fickle nature of cord-cutting millennials. Universal Studios Hollywood's biggest addition this summer is Jurassic World: The Ride, an updated version of its Jurassic Park-themed water ride.

A makeover makes sense. Comcast will be putting out the third installment in the Jurassic World franchise in two years, making it a more marketable opportunity than Steven Spielberg's original Jurassic Park property. The ride keeps most of the existing components, though it has added a jaw-dropping early scene where massive high-def screens simulate an aquarium that quickly turns chaotic. The new ride opened last month, and it's generating positive reviews.

Disneyland has been welcoming guests to Star Wars: Galaxy's Edge since the end of May, but reviews have been mixed for the only ride that is currently available in the 14-acre expansion. Millennium Falcon: Smugglers Run takes six guests into the starship with interactive missions as pilots, gunners, and engineers. I was able to experience all three roles in my three rides over three days, and I was less than impressed by the experience.

Only the two pilot roles offer a somewhat challenging gaming experience, and it's also the only assignment that allows you to continuously see what's happening outside the windshield where the storyline plays out. Gunners and engineers have a largely tiresome experience of pushing illuminated buttons on the side -- away from the screens -- and at the mercy of the the rocking starship jamming their fingers based on the aptitude of the pilots.

Everything else about Star Wars: Galaxy's Edge is a bar-raising experience. There are surprises at every turn that will make Star Wars fans giddy, and extract gobs of cash from their pockets. From $199 customized lightsabers to pricier droids and pricey next-gen beverages, Disney's latest addition will make a lot of money, and ideally any shortcomings for the expansion's original ride will be overcome when the second ride -- the more ambitious Rise of the Resistance -- opens in five to six months.

Knott's Berry Farm has always had a throwback vibe, and tucked in between the sky-high coaster thrills are horse-drawn stagecoach rides and retro amusement park flat rides. Cedar Fair is known more for its scream machines at Cedar Point, but income investors are particularly smitten by its beefy 7.5% yield. Cedar Fair will join Disney in reporting quarterly results this week, and more importantly provide insight into how this up-and-down summer season has been faring -- just as it's seemingly coming to a close.