It's been a fantastic year for Arrowhead Pharmaceuticals (NASDAQ:ARWR) so far in 2019. The stock has more than doubled. The biotech reported good news about its pipeline with its second-quarter results in May.

Despite an overall market sell-off on trade worries to start off this week, investors seemed to be pleased with Arrowhead's third-quarter update announced after the market closed on Monday. The biotech stock rose close to 3.5% in after-hours trading. Here's what you'll want to know about Arrowhead's Q3 update. 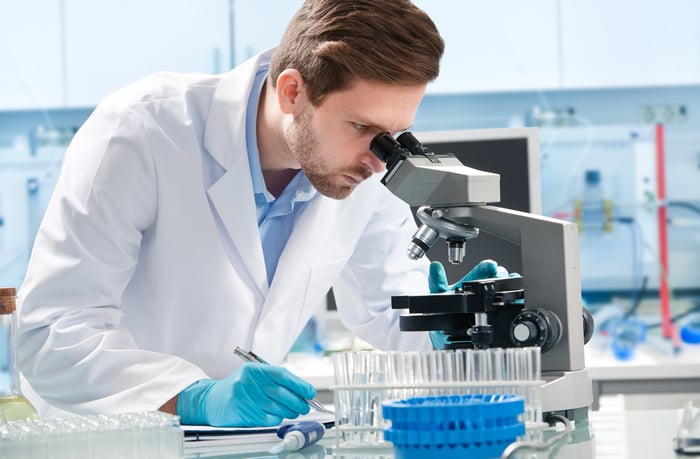 Revenue soared to $42.7 million in the third quarter, a huge jump from the prior-year period revenue total of $727,375. However, it fell below the average analysts' revenue estimate of $54.37 million.

Arrowhead reported net income under generally accepted accounting principles (GAAP) of $20.3 million, or $0.21 per share, in the third quarter. This represented a marked improvement from the net loss of $15.6 million, or $0.18 per share, posted in the same quarter of 2018. Analysts were expecting Q3 adjusted earnings of $0.29 per share.

The company ended the third quarter with cash, cash equivalents, and short-term investments of $188.3 million. This was an increase from the $30.1 million on hand at the end of September 2018.

Arrowhead's revenue and earnings numbers really didn't matter a whole lot. The company doesn't have a product on the market yet, so its main source of revenue comes from collaborations. For example, in the third quarter Arrowhead received $25 million from a milestone payment that Johnson & Johnson's Janssen unit paid related to the start of dosing of a patient cohort in the phase 1/2 clinical study evaluating a triple-drug combo of JNJ-3989 (formerly ARO-HBV), JNJ-6379, and a nucleotide analog.

Without this big milestone payment, Arrowhead would have again reported a big loss. Its operating expenses climbed nearly 45% year over year to $24.1 million. This increase was primarily driven by significantly higher research and development spending connected with Arrowhead's clinical studies.

The most important financial metric for Arrowhead was its cash stockpile. The company should be able to fund operations well into 2020 without having to raise additional cash.

However, the biggest news for Arrowhead in the third quarter wasn't financially related at all. Instead, it was connected to the pipeline progress the biotech continues to make. During Q3, Arrowhead achieved several notable milestones, including:

The primary thing for investors to watch with Arrowhead continues to be its clinical studies, especially those featuring lead candidate ARO-AAT. In addition, the company could add to its clinical pipeline in the near future. Arrowhead hopes to file Clinical Trial Applications (CTAs) by the end of this year to begin European clinical studies of ARO-HSD in treating liver diseases and for ARO-HIF2 in treating renal cell carcinoma.