Please ensure Javascript is enabled for purposes of website accessibility
Log In Help Join The Motley Fool
Free Article Join Over 1 Million Premium Members And Get More In-Depth Stock Guidance and Research
By Joe Tenebruso – Aug 6, 2019 at 7:24AM

This coffee-fueled growth story is far from over as digital initiatives and expansion in China keep the good times going.

The past five years have been most kind to Starbucks' (SBUX -0.63%) shareholders. Driven by new store openings and rising sales at existing locations, the coffee giant's stock has delivered total returns of more than 170% to investors over the past half-decade.

But what's to come for Starbucks in the next five years? 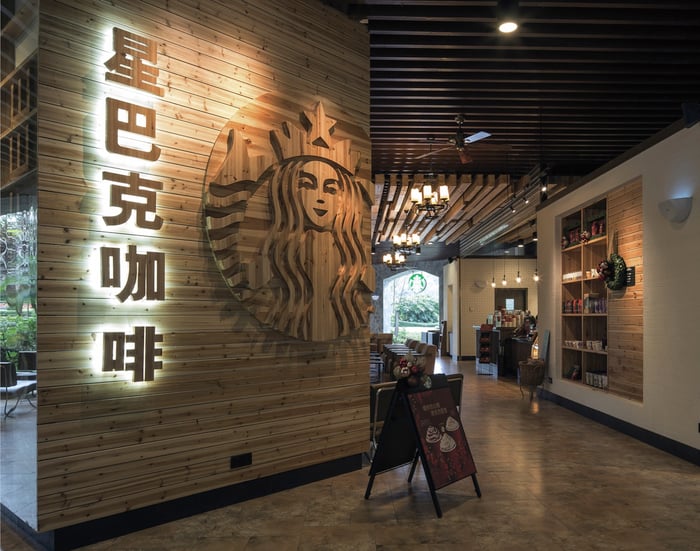 With its largest and most profitable market -- the U.S. -- experiencing tepid traffic growth, Starbucks will increasingly look to China as its primary growth driver. The Middle Kingdom is a massive market, and its still largely tea-drinking population of 1.4 billion represents a mostly untapped opportunity for Starbucks.

To seize this opportunity, Starbucks is opening new restaurants in China at an aggressive pace. The coffee titan is opening about 600 stores annually in the country, or about one store every 15 hours. Starbucks is expanding its business despite intensifying competition from rivals like Chinese coffee chain and recent IPO Luckin Coffee.

Starbucks' total store count in China increased by 16% year over year to 3,900 locations at the end of the third quarter. Comparable-store sales, meanwhile, rose 6%, with 2% coming from higher traffic. This shows that Starbucks is expanding its store base without sacrificing sales production at its existing restaurants. If it can continue to do so -- and all signs suggest that it will -- the company should be able to grow its store count in China by about 3,000 locations over the next five years. That would place it at about 7,000 stores, or nearly half of the number in the U.S. today.

Over the longer term, Starbucks' China business is likely to become even larger than its massive U.S. operations. "There's no doubt at some point China will exceed the U.S.," former CEO Howard Schultz said in 2016.

Starbucks's digital initiatives are helping to fuel its expansion. The company's rewards program saw its active members in the U.S. jump 14% year over year to 17.2 million members in the third quarter. This digital loyalty program is helping to boost sales at Starbucks' cafes, to the tune of 2 percentage points of comp growth in the U.S. in Q3. Starbucks' digital loyalty programs are also helping to drive growth in China, where it now has more than 9 million active rewards members, representing a year-over-year increase of 36%. "Digital relationships drive significant long-term value to Starbucks through more frequent occasions, increased spend, improved customer retention, and marketing efficiency," CEO Kevin Johnson said during Starbucks' Q3 conference call.

Delivery is another key component of Starbucks' digital strategy. The coffee giant recently expanded its partnership with Uber Eats as part of its plan to roll out delivery throughout the U.S. Starbucks also has a partnership with Chinese e-commerce giant Alibaba that has brought delivery services to 2,900 of its stores across nearly 80 cities in China.

As more retail sales shift to online channels over the next half-decade, Starbucks' delivery initiatives should play a vital role in helping the coffee house chain combat this challenge by bolstering its stores' sales productivity. Johnson said that delivery sales accounted for approximately 6% of the company's total sales volume in China in the third quarter. Investors should expect this figure to rise steadily in China and Starbucks' other markets in the coming years.