Only a week into August, Chinese stocks have tumbled thanks to trade tensions, providing a cheaper entry point. Here are three to check out.

Considering that China has become the world's largest automotive market and smartphone market, and is soon to be the world's largest retail market, it's no surprise that businesses and investors alike are scrambling to jump on the bandwagon. Even with China's economic deceleration in 2019, analysts still anticipate the country will drive global economic growth for the foreseeable future.

That growth will bring ample business opportunities. We asked three Motley Fool contributors to name Chinese stocks to keep an eye on, and here are the three they chose: JD.com (JD 3.09%), NIO (NIO 5.24%), and Baozun (BZUN 6.54%).

A long-term strategy paying off

Jeremy Bowman (JD.com): We're only a few days into August, and China stocks have already gotten shellacked on rising trade tensions. But for investors who can muster the mettle, the sell-off sets up an appealing buying opportunity. And one languishing Chinese stock that looks ready to turn the corner is JD.com.

JD, the biggest direct online retailer in China, resembles Amazon in a number of ways. The company has blanketed China with more than 550 warehouses to help it offer a speedy delivery, and it also runs its own logistics and delivery service, which it recently began opening up to third-party customers. 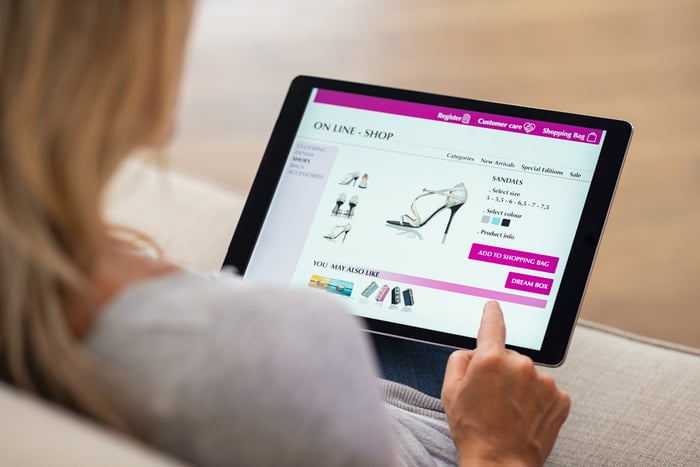 Those investments should soon start paying off on the bottom line, as JD's higher-margin service segment is growing much faster than the overall business. In the first quarter, revenue from services rose 44% to $1.9 billion, compared to overall revenue growth of 20.9% to $18 billion. Growth in logistics was especially impressive last quarter, jumping 92% to $638.6 million, while revenue from its marketplace, its other service business, increased 27%.

I expect to see another round of strong growth in logistics when JD reports second-quarter earnings on Aug. 13. Its delivery-focused business is emerging as its strongest competitive advantage, as well as a key differentiator from online marketplaces like Alibaba, China's leader in online sales by gross merchandise volume (the total value of sales on its platforms).

JD counts Walmart, Alphabet's Google, and Tencent among its backers. It trades at a modest price-to-earnings ratio of just 26 based on next year's expected earnings. With the company coming to the end of an investment cycle and seeing the emergence of its service business -- not to mention bold innovations around projects like drones and warehouse automation -- JD shares could soar next week if results show that recent investments are starting to pay off.

Daniel Miller (NIO Inc.): One intriguing Chinese stock to watch in August is NIO, simply because of its tantalizing long-term potential and current price.

Let's talk about the company's potential first. NIO is a leading premium electric-vehicle (EV) maker in China, and it stands to benefit as the government continues to push electric vehicles as a solution to its pollution and traffic congestion problems. EV sales in China are expected to explode in the coming decades, and NIO has a couple of factors in its favor.

First, its brand was recently ranked highest-quality in J.D. Power's inaugural China New Energy Vehicle Experience Index Study, which measures the number of problems in newer vehicles. NIO beat out competitors including BMW, which took second in the rankings, and two well-known Chinese automakers that tied for third place. NIO's increased credibility with its premium electric vehicles is good news: The Chinese government is cutting back EV subsidies as the industry is becoming more self-sustaining and EV prices drop, and that means consumers will focus on buying higher-quality vehicles.

NIO's high-quality rating is great news for investors, but the truth is that the company is in the very early innings of a long-term growth story, and that means it's going to be a bumpy ride. For instance, NIO's stock popped to $10.06 per share during late February, but after a disappointing first quarter, escalating trade tensions, and reduced China subsidies on EVs, the stock has tumbled to roughly $3 per share. That modest price could prove a valuable entry point for investors willing to own a risky stock long-term -- so long as the company can continue to spread its brand image, crank out new vehicles annually, and produce vehicles of the highest quality.

EV sales are expected to explode in the coming decades in China, in large part because it's much cheaper to obtain an EV license compared to a traditional combustion-engine vehicle. NIO is well-positioned for incredible growth if it can hang in there for a couple of likely slower years, as reduced subsidies will hurt demand temporarily. That said, NIO's modest price compared to only a few months ago, and its long-term potential, are reasons to watch this Chinese stock in August and for the foreseeable future.

Brian Feroldi (Baozun): Most U.S. investors will never use the products offered by China's tech companies, so it's understandable that many of those companies are not well-followed. That's doubly true for small Chinese tech companies. Baozun, for example, sports a market cap of less than $3 billion. That makes it easy to overlook, which is a shame, because there's a lot to like about the business.

The company operates an online platform that helps other businesses gain exposure to the huge e-commerce market in China. These range from small mom-and-pop stores that need help running their own online stores all the way up to the largest brands in the world --Nike, Samsung, and Microsoft are all customers.

Baozun is an attractive partner for businesses of all sizes because it has struck up partnerships with some of China's most important tech properties. Baozun can help its customers gain exposure on WeChat, Tmall, Weibo, and JD.com. It also has a deep understanding of the regulatory environment in China, which makes it attractive to large international partners.

Baozun's numbers prove that this is a great industry to invest in. Last quarter its revenue grew 40% to 1.29 billion yuan (roughly $192 million). The increased scale helped operating income to surge 61%, and adjusted earnings more than doubled.

Overall, Baozun looks like it's sitting in the sweet spot right now. Revenue is growing fast, the company has already achieved profitability, and it looks poised for decades of strong growth as the Chinese economy and middle class continue to grow. That makes it a great growth stock for any investor to add to a watch list.