Shares of Jack in the Box (NASDAQ:JACK), one of the largest hamburger chains in the U.S. with over 2,200 total locations, are up more than 13% Thursday morning after the company beat analysts' third-quarter estimates on the top and bottom lines.

The fast-food chain recorded a jump in revenue from the prior year's $188 million up to $222 million during the fiscal third quarter, just ahead of analyst estimates for $220 million. Adjusted earnings per share checked in at $1.07, up from the prior year's $1 per share and better than analyst estimates that also called for $1 per share. Jack in the Box's system same-store sales, which include figures from both the company-owned restaurants as well as franchises, increased 2.7% during the third quarter. Those same-store sales figures were a large improvement from the prior year's 0.5% gains. "Our greater emphasis on bundled value in the third quarter resulted in a substantial improvement in both traffic and sales trends while also driving check and maintaining strong restaurant margins," said Chairman and CEO Lenny Comma in a press release. 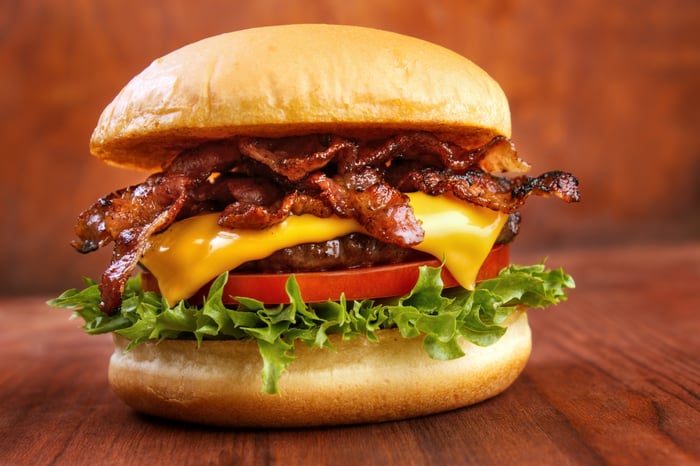 It was a solid third quarter for the company, which is good news for investors who were waiting to see how it would respond after ending its sales review -- when it was considering selling the company amid franchisee discontent and instead focused on restructuring its debt load. Management still has work to do as it tries to improve operations and meet the needs and interests of its franchisees, but the third quarter was a small step in the right direction.