Infinera (NASDAQ:INFN), a maker of equipment used in the telecommunications industry, reported its second-quarter results on Wednesday.

Investors were previously warned that the second quarter was going to be rough. Sales were expected to soar, and they did, but most of that growth is thanks to last year's buyout of Coriant. Management is still working to right-size the combined businesses' cost structure to realize the promised efficiencies of the deal. Infinera made progress on that front during the second quarter, but the bottom-line loss remained large, so there's still plenty of work left to do. 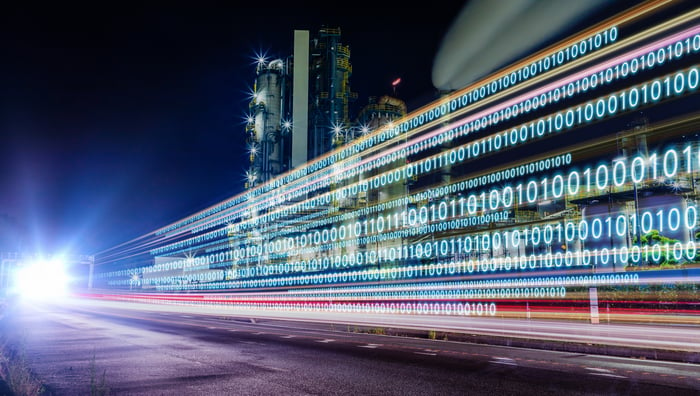 CEO Tom Fallon was quite pleased with Infinera's performance. "During the quarter, we significantly enhanced the longer-term position of the New Infinera with strong customer traction led by bookings from several new Tier-1 wins and the initial ramp of a new internet content provider," he was quoted as saying in a company press release. "Continued progress on our integration program, which we expect to largely complete in the fourth quarter of 2019, is enabling synergies to track ahead of prior commitments."

On the call with analysts, Fallon stated that bookings grew 15% quarter over quarter and he shared some upbeat comments about the pipeline:

We saw particular strength from Tier 1s globally, significant growth in subsea bookings and strong bookings from our new ICP customer. In fact, two of our top five bookings in the quarter came from customers that were new to the company. This strength more than offset continued weakness from our North America cable customer and has created a significantly expanded pipeline for the second half of the year.

On the call with analysts, CFO Brad Feller stated that Infinera's growing backlog gives the company confidence that it can return to profitability by the fourth quarter of this year. However, it expects to post another loss in the third quarter.

Fallon ended his prepared remarks by stating that Infinera is well-positioned to achieve its near-term financial targets:

The combination of significant order momentum, pipeline improvement and customer wins has driven improved confidence and momentum in our business. We expect to grow our backlog in Q3 and are reiterating our 2019 revenue target of $1.3 billion and the expectation of turning cash-flow-positive in Q4. The benefits of the Coriant acquisition are materializing, and the finalization of integration is now within sight for the New Infinera.