Macerich (NYSE:MAC) has one of the most impressive portfolios of retail real estate in the U.S., owning or co-owning dozens of high-traffic malls, mainly in urban areas. In spite of the ongoing retail apocalypse, the vast majority of its properties remain vibrant retail destinations.

Nevertheless, the past year has been one to forget for Macerich shareholders. Shares of the high-end retail REIT have lost nearly half of their value, falling to levels that hadn't been seen since shortly after the Great Recession ended. 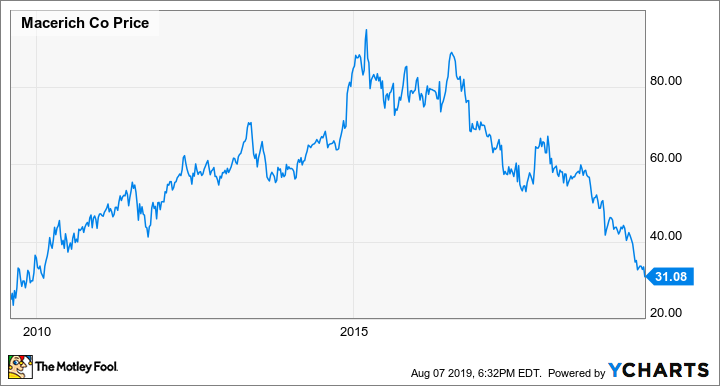 Declines in funds from operations (FFO) -- an important earnings-like metric for REITs -- likely drove this wipeout for Macerich stock. However, underlying business trends remain strong, making this look like a great time to buy Macerich stock at a discount.

By falling short of its guidance for two consecutive years, Macerich lost a lot of credibility with investors. It also didn't help that the REIT expects adjusted FFO per share to decline again in 2019, this time to a range of $3.50 to $3.58.

However, while the broader headwinds facing retail have contributed to Macerich's weak FFO trends, most of its FFO declines have been driven by one-off items that investors shouldn't be too concerned about. For example, Macerich sold two weaker malls in early 2017, hurting FFO by about $0.06 per share but significantly improving its portfolio quality. Other asset sales have also impacted FFO over the past few years.

Looking at 2019 specifically, a change in accounting rules is reducing FFO per share by $0.15. Macerich's initial guidance for the year also anticipated FFO headwinds totaling more than $0.20 per share due to higher interest rates (a trend that has since reversed), reduced lease termination revenue (which is beneficial in the long run), and the timing of asset sale activity. Adjusting for those items, FFO would be returning to growth this year.

Like many other retail REITs, Macerich is feeling some pain right now due to a spike in retail bankruptcies over the past year. This has caused an uptick in bad debt expense. Moreover, an unusually high proportion of the retailers filing for bankruptcy this year have liquidated rather than renegotiating their debts and staying in business. That has driven a modest reduction in Macerich's occupancy rate this year. Furthermore, the REIT often has to bring in temporary tenants at lower rents as replacements, before eventually finding new permanent tenants.

On the bright side, while there are still some major retailers in danger, Macerich's "watch list" of vulnerable tenants is now smaller than it has been in years. If the rate of retail bankruptcies slows over the next year or two, Macerich should be able to post solid FFO growth by filling the space that has become vacant this year and replacing many of its temporary tenants with higher-paying permanent tenants.

Other significant FFO growth drivers for the next couple of years include the opening of the new Fashion District Philadelphia mall next month and the redevelopment of several Sears stores that have closed recently.

There's no doubt that the retail industry's struggles have weighed on Macerich's FFO in recent years. However, the vast majority of its properties are high-quality malls with rising sales per square foot, which will enable Macerich to increase rents over time while maintaining strong occupancy rates over the long term.

Furthermore, even some of Macerich's weaker malls are located on valuable real estate. For example, last year the company formed a joint venture to redevelop its struggling Westside Pavilion mall in Los Angeles into creative office space. The transaction valued the property at a hefty $190 million.

Despite the REIT's stellar assets and solid long-term growth opportunities, Macerich stock trades for less than nine times FFO today. Its dividend yield is approaching 10%. Patient investors could see big gains over the next few years if Macerich can get FFO growing again as expected.