Still reeling from its surprise decision to terminate an exclusive partnership with the U.S. Postal Service earlier this year, Stamps.com (NASDAQ:STMP) endured another massive plunge in May after significantly lowering its already painful 2019 outlook.

Now, however, shares of the online postage company are rallying on the heels of the release of its second-quarter results late Wednesday. So, let's log on for a better idea of what drove Stamps.com as it ended the first half, as well as what investors should be watching for the rest of the year. 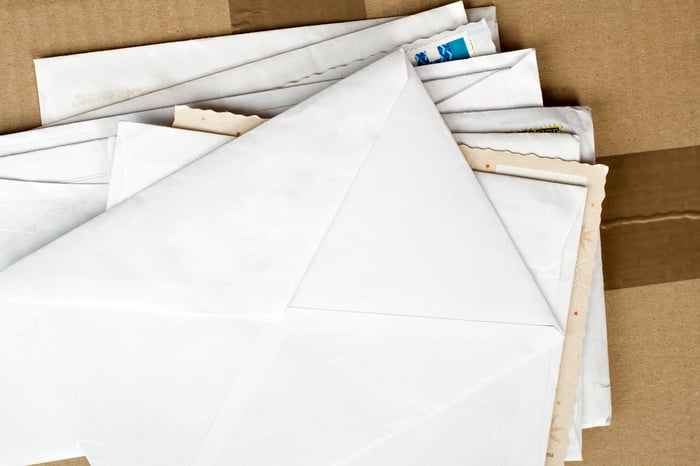 "During the second quarter we continued to make progress on our efforts to evolve our strategy to more fully embrace a global multi-carrier business model," stated Stamps.com Chairman and CEO Ken McBride. "Our financial results for the second quarter were in-line with our expectations in light of our new strategic direction."

During the subsequent conference call, McBride said Stamps.com continued to work with the USPS "to drive value for our customers," adding that it "remains a very important carrier partner for us."

"We also continued to make strides in our diversification of our carrier relationships with international posts including Royal Mail, French Post, Australia Post, and non-traditional carriers with our Global Advantage Program," McBride added. "Our financial results for the second quarter were in line with our expectations in light of our new strategic direction."

For perspective, last quarter's guidance reduction was caused by contract renegotiations between the USPS and certain reseller partners of Stamps.com.

Also during the call, however, McBride noted the company has "seen a positive shift in the USPS's negotiating position with respect to its reseller partners."

"Back in April, the USPS told some of the reselllers that their economics would be decreasing starting in June of 2019," McBride elaborated. "Recently however, the USPS extended the NSAs [negotiated service agreements] of some of our reseller partners at their current margins through the end of 2019."

Finally, McBride said that while the USPS intends to decrease the margins of those recently extended NSAs starting next year, it has "also recently engaged in more productive conversations that seem to recognize the value that resellers bring to the post office."

To be clear, the stated goal of Stamps.com's decision to end its exclusive alliance with the U.S. Postal Service was to enable it to "fully embrace partnerships with other carriers" -- and the company is working toward doing exactly that. But with the short-term pain the move brought to Stamps.com's business and share price, it's hard to argue with some incrementally good news.