The Coca-Cola bottler has unlocked value in its business through productivity enhancements over the last few years. Investors are starting to take notice.

Coca-Cola Consolidated (COKE 0.62%) is the largest Coca-Cola bottler in the United States, but as an investment, it tends to get overshadowed by Coca-Cola -- its biggest customer. In the last 12 months, a string of positive quarters has certainly increased the company's visibility; shares have leaped 83% year to date. Indeed, the bottler's stock gained more than 10% in the Wednesday trading session following release of second-quarter 2019 earnings Tuesday evening. Below, we'll delve into the quarter's details and look into the factors that are driving enthusiasm for the sprawling bottling enterprise.

Data source: Coca-Cola Consolidated. N/A = Not applicable; difference too great to be meaningful.

What happened with Coca-Cola Consolidated this quarter? 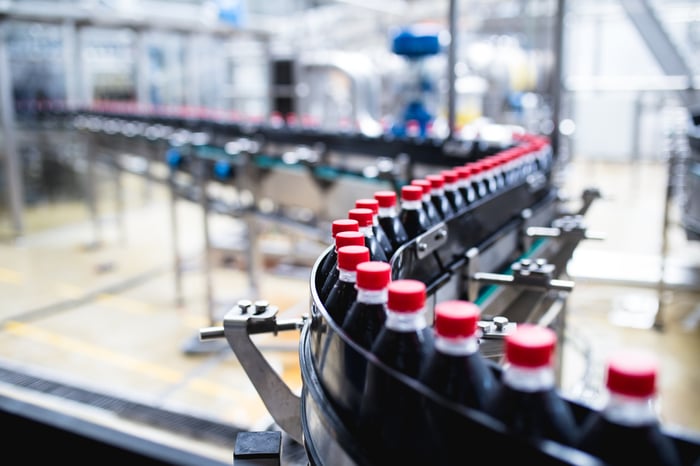 In Coca-Cola Consolidated's earnings press release, CEO Frank Harrison touched on the organization's cost discipline in operations and alluded to new product opportunities from Coca-Cola (which accounts for roughly 88% of the company's revenue) and other major beverage companies, which are helping to scale its business:

We are very pleased with our second quarter performance as well as the solid results we generated in the first half of this year. We are making excellent progress in leveraging the scale of our business, improving our margins and driving consistent marketplace execution across our expanded territories.

Our strong revenue performance reflects our commitment to margin improvement, the strength of our brands and the passion of our teammates. Importantly, our Sparkling portfolio is performing very well in the marketplace, enabling us to grow our value share in this category. We continue to work closely with our brand partners to drive excitement and higher levels of growth for our Still products as we respond to increasing consumer demand for drinks with unique flavors and functional benefits.

Coca-Cola Consolidated doesn't issue forward quantitative guidance. However, shareholders can expect that the company will continue to realize the benefit of cost-cutting and investments in efficiency in the remaining two quarters of 2019. While it may be difficult to envision shares rallying much beyond their stellar appreciation in the first half of 2019, the company's stock still holds significant long-term potential. Higher margins coupled with a loyal base of top-tier beverage companies have unexpectedly turned Coca-Cola Consolidated into an exciting consumer goods investment idea in 2019.