The second iteration of EPYC is here, and Intel should be worried.

Shares of Advanced Micro Devices (AMD 2.60%) soared on Thursday after the company launched its second-generation EPYC server processors. Alphabet subsidiary Google and Twitter both announced that they had or were planning to deploy the new chips, adding to AMD's customer list. As of 1:30 p.m. EDT, the stock was up 16.5%.

AMD's second-generation EPYC family of server processors are built on the same 7-nanometer manufacturing process as the company's latest Ryzen PC CPUs and Navi-based GPUs. The new EPYC chips feature as many as 64 cores based on the Zen 2 architecture, ranging in price from $450 to $6,950. 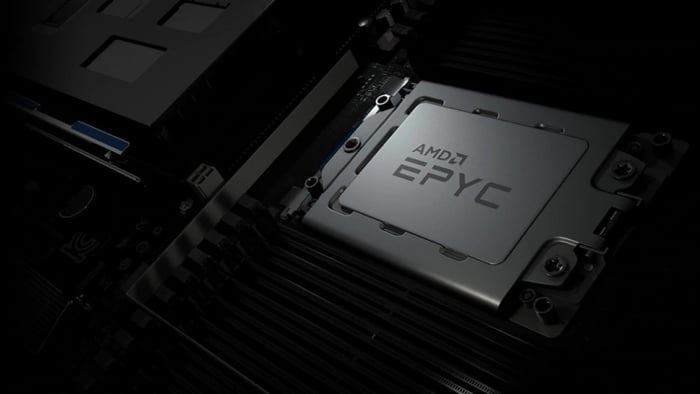 Reviewers at Anandtech found that the 64-core variant offered 50% to 100% better performance and a 40% lower price than the comparable server chip from Intel. From Anandtech's review:

So has AMD done the unthinkable? Beaten Intel by such a large margin that there is no contest? For now, based on our preliminary testing, that is the case.

Even after launching the first generation of EPYC chips in 2017, AMD remains a small player in the server chip market. The company had a 3.4% share of the x86 server CPU market at the end of the second quarter, according to Mercury Research, leaving Intel with the rest.

AMD's second-generation EPYC has the potential to be a game changer for the company, although Intel could blunt the impact by cutting prices for its largest customers. AMD winning market share looks like a sure thing given the performance and value of EPYC, but it may take multiple years for AMD's comeback to fully play out.