People have treasured gold since the dawn of recorded history, both for its usefulness in jewelry and other practical applications and for its role as a store of value and foundation for tradable currency. Even as the end of the gold standard greatly diminished the yellow metal's role in global commerce, it nevertheless remains a go-to safe-haven asset during times of trouble.

Gold prices have been on the uptick so far in 2019, and recently, the metal pushed above the key $1,500-per-ounce mark. That was the first time in more than six years that gold had been that expensive, and with a performance that eclipses even strong stock market returns so far this year, the move has investors paying close attention.

Yet those seeking to profit from gold's upward moves should understand that there's more than one way to invest in the precious metal. Depending on which one you choose, you could see very different returns. 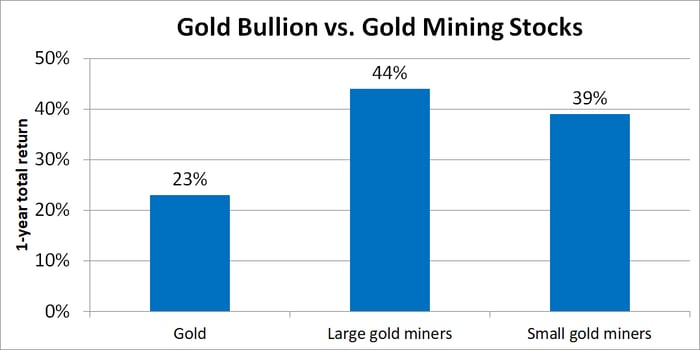 Those who want direct exposure to moves in gold bullion prices can either purchase gold coins directly from dealers or use special exchange-traded funds like SPDR Gold Trust (NYSEMKT:GLD) as a proxy. As you can see above, the latter option has produced strong results so far this year.

However, gold mining companies can often give even more concentrated exposure to gold. Because a gold miner's profits are determined by the difference between its costs of production and prevailing prices in the gold market, a given percentage move in bullion prices generally equates to a larger percentage change in profits. That often makes mining stocks more volatile in both directions. Returns for the VanEck Vectors Gold Miners ETF (NYSEMKT:GDX) and the VanEck Vectors Junior Gold Miners ETF (NYSEMKT:GDXJ), which track larger and smaller gold mining companies, respectively, show the heightened gains mining companies can produce during rallies in gold prices.

It's a bit unusual for large miners to outperform small ones, because large miners often have healthier profit margins that insulate them more from price moves than small miners. Yet major consolidation among top miners has helped boost share prices as well. If that merger and acquisition activity continues, it could creating a positive feedback loop leading to further gains for gold -- and that would likely draw even more attention back to precious metals after several years of generally lackluster performance.