Please ensure Javascript is enabled for purposes of website accessibility
Log In Help Join The Motley Fool
Free Article Join Over 1 Million Premium Members And Get More In-Depth Stock Guidance and Research
By Adam Levine-Weinberg - Updated Aug 13, 2019 at 8:17AM

Dillard's owns a lot of real estate -- but that won't keep its stock afloat if the retailer's profitability continues to deteriorate.

Shares of Dillard's (DDS -4.79%) skyrocketed 24% in a single day last month due to an apparent short-squeeze. Reports that prominent hedge fund manager David Einhorn had invested in the company might have helped power this huge gain. In Greenlight Capital's second-quarter investor letter, Einhorn justified the purchase by noting that Dillard's has a strong balance sheet, is solidly profitable, buys back lots of stock, and -- most importantly -- owns a huge trove of real estate.

Over the past several weeks, Dillard's stock has surrendered all of the gains from that wild day of trading last month. That has created an opportunity to invest in Dillard's at a price similar to what Einhorn paid. However, buying Dillard's stock primarily because of its supposed real estate value doesn't seem like a smart move. 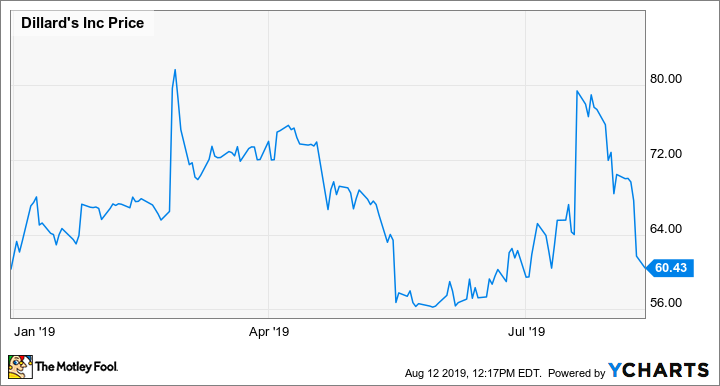 Dillard's does own a lot of real estate, but it may not be worth very much

Dillard's operates nearly 300 stores across the U.S., mainly in Sun Belt states. Only 26 of those stores are leased. Instead, the company owns the vast majority of its stores, with ground leases and part-owned buildings accounting for the remaining locations.

As of early February, Dillard's owned 44.3 million square feet of store real estate, as well as office, distribution, and storage space totaling nearly 4 million square feet. Einhorn claims that buying the stock around current levels is equivalent to buying the real estate for just $27 per square foot: a massive discount to the valuations applied to other department store chains like Macy's (M -1.91%) -- let alone mall giant Simon Property Group. (My own calculations put the effective price a little higher, at $35 to $40 per square foot.)

Einhorn isn't the first investor to buy Dillard's stock based on its real estate potential. Snow Park Capital Partners acquired a 2% stake in the company two years ago, based on the thesis that Dillard's real estate could be worth more than $200 per share. (Dillard's stock has gone nowhere since then.)

However, while Dillard's has a handful of stores in top-tier malls, most of its real estate isn't very desirable. For example, the company recently closed a store in Ohio and sold it for just under $9 million, or about $50 per square foot. Dillard's doesn't operate in markets like Boston, New York, Washington, D.C., Chicago, Los Angeles, San Francisco, or Seattle, where real estate is scarce and very expensive. By contrast, Macy's owns lots of real estate in all of those metro areas, including big downtown flagship stores in several of them. Most Dillard's stores are located in markets in which real estate values are fairly modest. Image source: Author.

The general quality (or lack thereof) of Dillard's real estate can be seen from the low productivity of its stores. Sales per square foot came in at about $130 last year, compared to nearly $200 for Macy's. These figures do not adjust for e-commerce sales. Since some sales are made online, the actual productivity of the stores themselves is lower.

Profitability has been declining rapidly

While bulls appear to have an inflated view of Dillard's real estate value, investors like Einhorn are probably right that the real estate is worth more than Dillard's current enterprise value. If that were the end of the story, it might make sense to buy Dillard's stock. However, shareholders also own a retail company -- one that isn't doing very well.

Overall retail sales trends are likely to worsen over the next few years after being quite strong for the past couple of years. Moreover, given that Dillard's has been very stingy about investing in its business, there's no reason to expect a big turnaround sometime in the future. Investors have to weigh the risk that the business will eventually become unprofitable against the value of its real estate. A retail downturn could also make Dillard's mall-based real estate less valuable.

Insider ownership may not be a good thing

Bulls may be pinning their hopes on the idea that if Dillard's retail business takes a turn for the worse, the company can always pivot to monetizing its real estate instead. But just because Dillard's could follow that path doesn't mean that it actually would do so.

A solid majority of Dillard's stock is owned by members of the founding family (who are also active in the company's management) and the company's employees. That's much different than the situation at Macy's, which also has undervalued real estate but is mainly owned by profit-seeking institutional investors.

The family members and employees are unlikely to favor radically shrinking the Dillard's store base to cash in on its real estate value until they have no choice. The family gains prestige from having its name on a big retail chain, while employees will naturally want to protect their jobs.

If Dillard's retail operations unexpectedly return to sustainable profit growth, its stock is likely to soar. However, if the retail business continues to get worse, investors shouldn't expect the company's real estate value to buoy the stock.