Stocks soared Tuesday after the Trump administration announced that it would delay until December threatened new tariffs on some categories of Chinese goods, including smartphones and laptop computers. The Dow Jones Industrial Average (^DJI 0.03%) and the S&P 500 (^GSPC 0.01%) both gained about 1.5%.

As for individual stocks, the easing of trade tensions boosted shares of most Chinese companies, but positive quarterly reports gave investors even more reason to show interest in JD.com (JD -1.16%) and Tencent Music Entertainment (TME 0.25%). 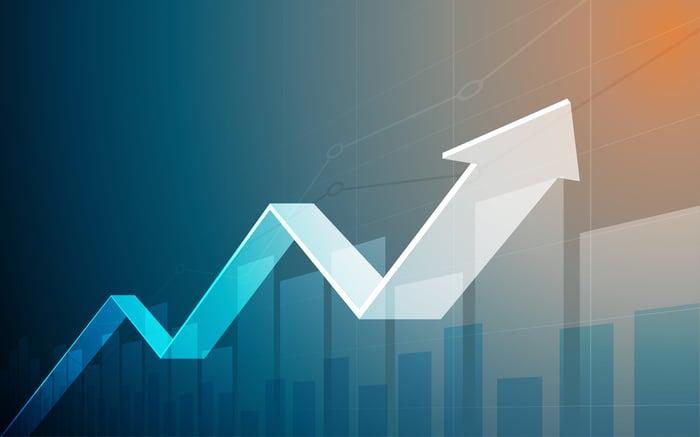 Shares of Chinese e-commerce retailer JD.com soared 12.9% after the company crushed profit expectations when it reported second-quarter results this morning. Revenue grew 22.9% to $21.9 billion and non-GAAP earnings per American depositary share (ADS) came in at $0.33, compared with $0.05 in the period a year ago. Analysts were expecting non-GAAP earnings of only $0.07 per share on revenue of $20.9 billion.

Gross margin at JD Retail expanded by 76 basis points, and profits were also boosted by growth in JD's service businesses. Logistics and services revenue increased 98% and the company's third-party logistics business achieved a positive non-GAAP operating profit for the first time. JD's investments in building its logistics capabilities are also helping to slow fulfillment expense for its own retail business. Fulfillment expenses were 6.1% of revenue compared with 6.7% in Q2 last year.

Looking forward, JD guided to revenue growth between 20% and 24% in Q3, well above the analyst consensus of 17% growth.

Chinese music-streaming specialist Tencent Music Entertainment beat expectations for the second quarter and shares inched up 0.6%. Revenue soared 31% to $859 million, handily beating expectations for $843 million. Net profit increased 2.5% year over year to $0.08 per ADS, or $0.10 excluding items like share-based compensation and amortization, which was $0.01 better than Wall Street was expecting on that basis.

The "Spotify of China" had strong user growth, adding 2.9 million subscribers to its online music service for a record 31 million, an increase of 33% over the period a year ago. Paying users for the company's social entertainment segment grew 16.8% to 11.1 million. Revenue from online music jumped 20.2%, while social entertainment services, which includes online karaoke and live streaming of music events, increased 35.3% year over year and accounted for 74% of total revenue.

Tencent Music is making progress converting users from ad-based free services to paid subscriptions. It's also adding new partnerships to get its services into cars, smart speakers, and smart watches, and taking initial steps to expand into Southeast Asia.