Tencent Music Entertainment (NYSE:TME) investors have had a rocky road this year. One day the stock pops 10%. The next, it drops 10%. It all depends on what the company has to say in its earnings reports -- and what Wall Street has to say about those earnings.

It's time to buckle up, investors, because shares of "the Chinese Spotify" could be set to take you for another wild ride. In just a couple of weeks, Tencent should release its Q2 2019 earnings -- but before that happens, one analyst is giving the stock a thumbs-up. 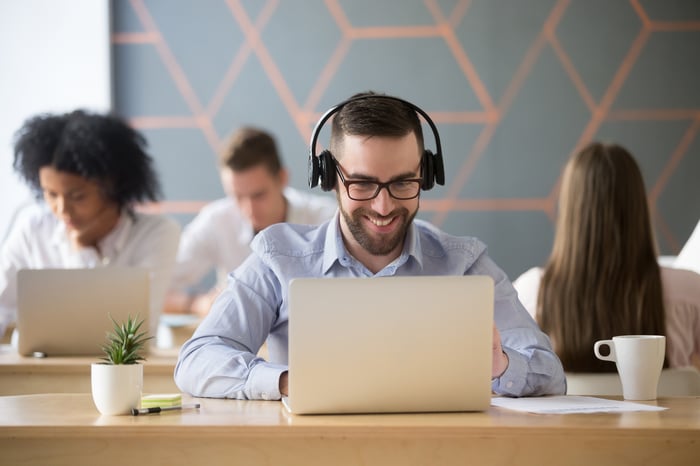 Earlier this month, Tencent advised investors of its plan to publish unaudited Q2 earnings results after close of trading on Monday, Aug. 12. Yesterday afternoon, investment banker Oppenheimer attempted to get a jump on that news, initiating coverage of Tencent Music Entertainment stock with an outperform rating and an $18 price target implying 25% upside, according to a new report from StreetInsider.com.

"We are initiating coverage of Tencent Music Entertainment," said the analyst, because it's "the largest digital music company in China" -- and not only that, but a company with a long runway leading to future growth ahead of it.

"TME operates four of the five most popular digital music apps in China," according to Oppenheimer, and boasts "market penetration of over 90%." Tencent already "owns the most comprehensive music content library in China." Moreover, it's working to differentiate itself from other providers by "investing in its own exclusive content" that can't be heard anywhere else.

The analyst believes the company's strong music library combined with "enhanced content leadership" could be key to growing the 4.3% of its users who currently subscribe to the service. And it's this potential to turn mere "users" into subscribers that creates the "massive monetization potential" that Oppenheimer is counting on to turn Tencent Music into a buy.

Tencent by the numbers

Which is not to say that Tencent Music isn't already doing pretty well in the monetization department. While reported net income as calculated according to generally accepted accounting principles (GAAP) was only $295 million over the past 12 months, actual free cash flow at the company approached $950 million.

One consequence of Tencent Music generating so much cash is that although the stock looks a bit pricey at first glance -- costing 80 times trailing earnings -- when you value Tencent Music on its free cash flow, its multiple is closer to 25.

A second consequence of generating so much cash is that it tends to pile up over time. At last report, Tencent Music had in excess of $2.6 billion in cash on its balance sheet and negligible debt. Adjusted to reflect this net cash balance, the stock's enterprise value-to-free-cash-flow ratio falls to an even more attractive 22.2. And when you consider that analysts on average peg Tencent Music for a 30% long-term earnings growth rate, it's hard to escape the conclusion that the stock is really cheap right now.

Granted, this assumes that Tencent Music manages to actually achieve the 30% earnings growth rate that Wall Street predicts for it, and that could be a risk.

Oppenheimer notes that Tencent Music's subscriber rate is only 1/10th that of Spotify's, which does seem to support the argument that there's growth to be had. On the other hand, last quarter, Tencent Music's 17% year-over-year earnings growth rate was well short of 30%. On the third hand, though, year-over-year revenue growth did easily top 30% -- 39%, to be precise.

In the end, therefore, it seems to me that the opportunity for "massive monetization potential" is indeed there. All Tencent needs to do now is execute and achieve it.