The Oracle of Omaha has been building cash in 2019, but that’s no reason to fear the market or deviate from your long-term investing plan.

Warren Buffett is no doubt one of the greatest investors of all time, if not the greatest. Running his conglomerate Berkshire Hathaway (BRK.A 2.29%) (BRK.B 2.38%) since 1965, Buffett has achieved remarkable 20.5% annualized returns through 2018. If you add the performance from the partnership he ran from 1956 until 1969 (Berkshire was initially a holding in that partnership), his record is even better, as the Buffett Partnership achieved gross annualized returns of 29.5%.

As my Motley Fool colleague Sean Williams recently pointed out, Buffett has been relatively inactive over the past couple of quarters. In fact, over the past three quarters, Berkshire has actually been a net seller of stocks, boosting the conglomerate's massive cash hoard to $122.4 billion. Not only that, but Berkshire also slowed its share repurchases from $1.7 billion in the first quarter to just $400 million in the second quarter.

Some may interpret these (in)actions as a big danger sign. After all, if Buffett isn't finding anything of value and is hoarding cash, it could signal that he thinks stocks are way overpriced, or that he fears an economic downturn is imminent.

But I think these concerns are misplaced. Recessions and stock market crashes are nearly impossible to predict, and I wouldn't necessarily take Buffett's inaction as a cue to stop investing in the market or alter your long-term investment plans. Here's why. 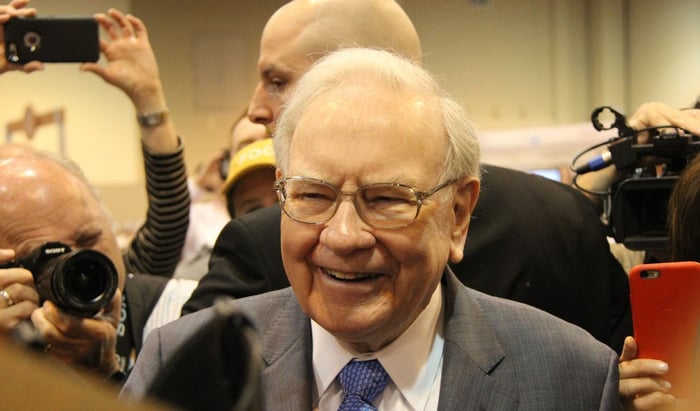 Just because Berkshire has been relatively neutral on stock purchases and sales, it doesn't mean it hasn't been buying anything. In fact, if you were to look at the stocks Berkshire purchased over the past few quarters, you might think Buffett anticipates an economic boom rather than a bust.

If a recession were just around the corner, the last sectors you would want to invest in would be cyclicals. A cyclical stock is one that booms during good economic times and busts during downturns. Cyclicals include banks, which need customers to pay back their loans; commodity companies, which sell products whose prices go up and down with consumer demand; and airlines, which have very high fixed costs, leading to big profit when demand for air travel is high, and little to no profit (or worse) when demand is low.

So what has Buffett been investing in over the past few quarters?

The banking sector is a particular favorite for him, and over the past few quarters, Berkshire has increased its stakes in several banks, including JPMorgan Chase, PNC Financial, Bank of New York Mellon, U.S. Bancorp, and Buffett's apparent favorite, Bank of America (BAC 1.64%).

In fact, a recent regulatory filing showed that Buffett purchased even more Bank of America stock in the second quarter, taking his holding in the bank above 10%. That's important, as exceeding 10% puts an extra burden on Berkshire to provide additional disclosures that Buffett has long sought to avoid. In fact, that's why Buffett had been trimming his massive stake in Wells Fargo, another big bank, which has contributed to Berkshire's quarterly stock sales.

Apparently, Buffett has been so bullish on Bank of America in particular that he was willing to assume the new disclosure burden of owning over 10% of its shares. For an economically sensitive stock like Bank of America, it's not what you'd expect from someone expecting a coming recession.

Going upstream in the oil patch, while trimming downstream

Buffett also dived back into the oil patch over the past few quarters, a sector he had previously been more heavily invested in, but had exited in recent years. In the fourth quarter of 2018, Berkshire took a $300 million stake in Suncor Energy (SU 5.33%), Canada's biggest oil and gas company.

Buffett followed that up this spring with a massive $10 billion preferred stock investment in Occidental Petroleum (OXY 4.92%), which the company used to purchase Anadarko Petroleum in a massive acquisition that closed last week. Though this investment is in preferred stock, which yields 8% and is thus somewhat like a debt instrument, Berkshire also has exposure to the upside in Occidental's common shares.

Berkshire was also granted warrants to purchase up to 80 million shares of Occidental at a strike price of $62.50, much higher than the current level of $45. As an upstream driller, Occidental's fortunes are largely determined by oil prices, and if an economic crash occurs, oil would be going in the wrong direction for Occidental.

And while Berkshire has been a big seller of another oil-related stock, Phillips 66, Phillips is a downstream refiner, meaning it makes money on spreads between what it buys oil for and what it sells it for. Therefore, its fortunes aren't as levered to oil prices as upstream drillers such as Suncor and Occidental.

Finally, Buffett is also a proud owner of all four major U.S. airlines. And in the first quarter, he got so caught up in his love for Delta (DAL 3.47%) that he increased his already huge stake by 8.2% and accidentally went over the 10% threshold for Delta shares. Buffett claimed that going over 10% in Delta was a mistake. That's in contrast to his exceeding 10% in Bank of America more recently, which was likely premeditated.

So, did Buffett sell any shares when he found out he had accidentally gone over 10%? No -- he actually bought more.

While Buffett had trimmed some stakes in his other airlines in previous quarters, these sales were also likely efforts to stay below the 10% threshold, as these companies have been repurchasing shares and thus reducing their share counts; but since Buffett stuck around in Delta even after his "mistake," he's clearly not afraid of this cyclical sector by any means.

Though Buffett's total "net" purchases have been muted in recent quarters, remember that he has a problem you and I don't. Berkshire is a cash-generating machine, meaning Buffett constantly has cash coming in the door from Berkshire's various businesses. Therefore, he needs to continually buy securities merely to keep Berkshire's cash pile level. In addition, Buffett's previous unwillingness to own more than 10% of a public company also made him somewhat of a forced seller over the past three quarters -- though he seems to have violated that policy just recently.

Finally, Buffett has a very limited universe of stocks he can buy -- only a small number are large enough to move the needle for Berkshire, and it's rare that one becomes significantly undervalued. In contrast, you and I are free to purchase all kinds of stocks, from small caps to the very biggest stocks in the world.

In light of Buffett's unique circumstances and his recent investment in cyclicals, I wouldn't take his lack of "net" buying as a huge warning. Berkshire's stock was also mostly higher in the second quarter than the first quarter, which likely explains the lower level of buybacks.

If you have an investing plan, don't stray from it based on fears of an impending economic crash. Those things are rather difficult to predict, and attempts to time the market are usually a fool's errand.