Please ensure Javascript is enabled for purposes of website accessibility
Log In Help Join The Motley Fool
Free Article Join Over 1 Million Premium Members And Get More In-Depth Stock Guidance and Research
By Reuben Gregg Brewer – Updated Aug 14, 2019 at 9:04AM

It's still early days, but Vale looks like it will be dealing with a pair of mine disasters for many years

Giant Brazilian miner Vale (VALE 1.09%) has been in the news for all the wrong reasons lately, and there's actually very little reason to expect material improvement. Here's an update on what's going on, and why the stock remains a very risky investment.

The core of the problem

Vale's current troubles date back to 2015, when a mine waste dam broke at the Samarco mine, a 50/50 joint venture between Vale and peer BHP. The waste, or tailings in industry jargon, from that rupture destroyed a nearby village and killed 19 people. While Vale was working through the physical, legal, and regulatory mess left behind from that event, it was hit by another, larger, incident in early 2019. This time a mine waste dam broke at its wholly owned Bramadinho mine, destroying property and killing 248 people. 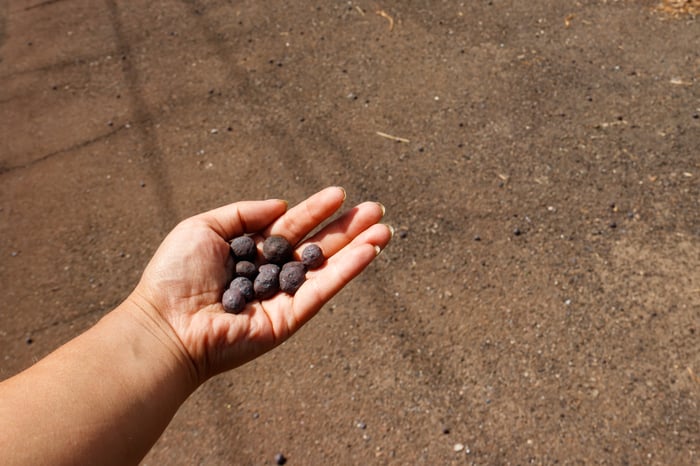 At this point, the company has to play it safe and be contrite. That has meant closing some operations as it reexamines its other tailings dams, which has already led to a 20% reduction in its 2019 production guidance. The company has also eliminated its dividend and cut ties with many of its ecexutives. Local courts, meanwhile, have frozen some of the company's assets.

Not surprisingly, the stock has fallen over 10% this year, while peers BHP and Rio Tinto are up 4% and 7%, respectively. Vale's production cuts, along with one-time weather events in Australia, have led to higher iron ore prices, which is a net benefit to iron ore miners and helped support the stock prices of BHP and Rio this year. Based on recent events, it probably shouldn't be too surprising to find that Vale's stock has underperformed.

But the stock's laggard performance has left it looking relatively cheap. Its price to book value of 0.4 times is well below BHP's 2.5 and Rio's 2.2. The same trend holds true for price to sales as well, with Vale's 1.9 times sitting below BHP's 3.3 and Rio's 2.2. More aggressive investors might look at this and come to the conclusion that the low valuation is worth the risk of a problem that will eventually get resolved.

There's a long way to go

The problems Vale are dealing with are huge and costly. For example, the company took one-time charges totaling $4.95 billion in the first quarter of 2019 because of the mine disasters. That, however, wasn't all, and it took another $1.5 billion charge in the second quarter. Needless to say, it posted large losses in both quarters. These charges are meant to cover the cost of asset shutdowns and pay damages to victims and their families. 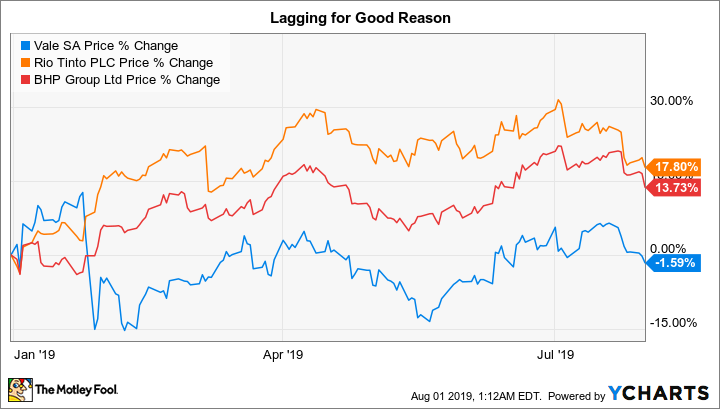 But this is far from over, and Vale is an easy target right now since fighting back too hard against public opinion would likely lead to a lot of negative sentiment, which it can ill afford. For example, in early July a Brazilian court held Vale liable for damages related to the Bramadinho disaster. However, the court didn't actually assign any damages, instead saying that a number is "not possible to quantify." Further, damages would include not just the dead, but also the impact on the environment and regional economy. Vale responded that it was totally committed to fair and quick reparations.

And then there's the Samarco disaster, which after four years still isn't behind the company. In fact, the Bramadinho event led prosecutors to stop working on a Samarco settlement, which is troubling on multiple fronts. First, the delay increases the timing uncertainty and legal costs involved in the process. Second, it's entirely possible that the roughly $41 billion figure currently in play could go higher (Vale would be responsible for half of that). And third, if the first event costs $41 billion (or more) to settle, what will the second, larger event end up costing? And, just to add to the pile of troubles, investors are now going after the company for compensation as well.

It is unlikely that anyone wants to see Vale go out of business, since that would mean that nobody gets any money. However, the timing and cost of any solution to the company's many problems are highly uncertain. That said, one thing is sure: Solving the mess left behind from this pair of disasters will be very expensive. That's a material headwind for Vale's business and stock. Even spreading the eventual cost over many years isn't a great outcome, since Vale's future results will continue to be burdened by the costs until they are fully paid. Passing on the stock is probably the best choice.