The stock market suffered large losses on Wednesday morning as optimism about a potential U.S.-China trade resolution gave way to new concerns about global economic growth. Yields on the 10-year Treasury note fell to 1.6%, creating an inverted yield curve in which rates on shorter-term bonds are higher than on long-term bonds. That often signals a recession. As of 11 a.m. EDT, the Dow Jones Industrial Average (DJINDICES:^DJI) was down 522 points to 25,758. The S&P 500 (SNPINDEX:^GSPC) fell 59 points to 2,868, and the Nasdaq Composite (NASDAQINDEX:^IXIC) declined 184 points to 7,832.

Some sectors of the economy have been in high-growth mode lately, while others have had to struggle under low-growth conditions for a long time. Yet bad news from both areas weighed on investor sentiment today, as both cannabis company Tilray (NASDAQ:TLRY) and department store retail giant Macy's (NYSE:M) delivered financial results that left investors wanting more.

Shares of Tilray were down 13% Wednesday morning after the Canadian cannabis specialist announced its second-quarter financial results. The report included both good and bad news, but investors seemed to focus on the negatives for the marijuana stock. 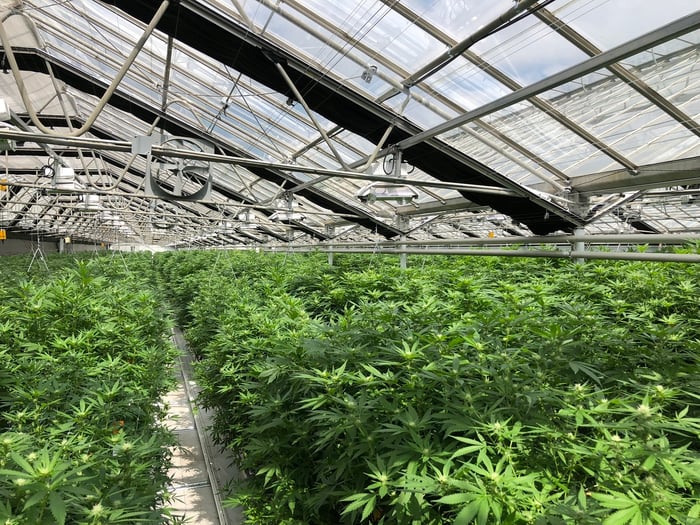 On the plus side, Tilray continued to expand. Revenue soared 370% from year-ago levels as the company kept building momentum following the legalization of recreational cannabis in Canada. The marijuana cultivator said that revenue from adult-use Canadian cannabis almost doubled just over the past three months alone. The acquisition of edibles specialist Manitoba Harvest also helped bolster Tilray's results.

However, investors focused instead on a couple other areas. On the medical marijuana side, revenue actually fell slightly from year-ago levels. More importantly, losses ballooned, nearly tripling from the year-earlier period and exceeding what most of those following the stock were anticipating. That's largely what sent the stock lower.

CEO Brendan Kennedy expressed some frustration at the emphasis among investors on short-term profitability, as he's squarely focused on maximizing long-term potential. That makes today's drop in Tilray stock a potential buying opportunity for those who share Kennedy's vision for the cannabis company's future.

Shares of Macy's fared no better, plunging 17% and hitting their lowest level in a decade. The department store chain continues to have trouble adapting to changing conditions in the retail industry, and investors appear to be losing confidence that it will escape the same fate that some of its weaker peers have faced.

Fundamentally, Macy's just looked weak. Comparable sales grew just 0.2% for its company-owned stores, and adjusted earnings plunged 60% on a per-share basis from year-ago levels. CEO Jeff Gennette noted that the company had a slow start to the quarter and cited high inventories, poor fashion decisions, and a drop in international tourism as factors holding Macy's back.

Macy's hasn't given up hope entirely. The department store retailer is still going after growth opportunities by revamping its stores while boosting its digital business. It still thinks it'll be able to keep full-year sales flat compared to 2018, although it did cut its earnings guidance.

In the long run, Macy's will have to find ways to overcome ongoing headwinds if it wants to succeed. Otherwise, the company will have to fall back on things like the value of its real estate in order to get the stock moving back in the right direction.