The co-working office space provider, rebranded as the We Company, will be the latest in a series of high-profile IPOs debuting on the public markets in 2019.

The We Company, also known as WeWork, filed its highly awaited Form S-1 with the Securities and Exchange Commission (SEC) on Wednesday in advance of its initial public offering (IPO), which could now come as early as September. The company will trade under the ticker symbol "WE."

The company announced in April that it had filed a confidential draft registration statement with the SEC in a process that allows it to initially withhold certain sensitive information -- including financial metrics -- from public scrutiny until much closer to its public debut.

In this updated filing there are still several big unknowns regarding We Company's IPO. It has yet to disclose the exchange where it plans to list its shares, the total value of its filing, or when it plans to go public. But here is some of the investing information we do now know about this workspace rental company founded in 2010. 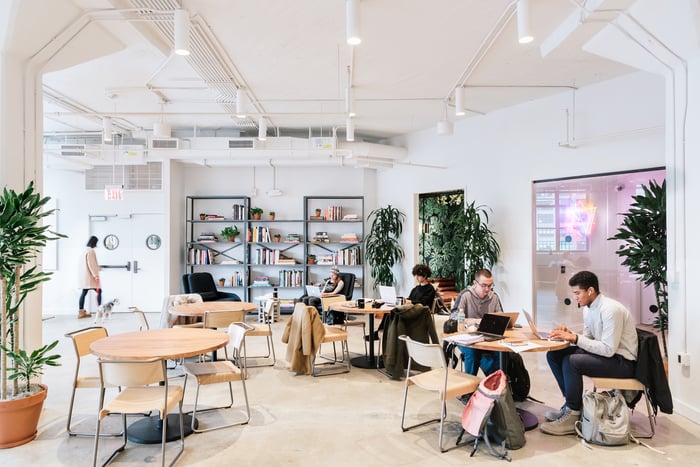 Like many of its 2019 IPO peers, We Company reported soaring revenue paired with just as significant losses. For the six months ended June 30, 2019, the company generated revenue of $1.54 billion, an increase of more than 101% year over year. This continues the massive growth seen over the preceding three years, as revenue grew to $1.82 billion in 2018, up from just $436 million in 2016.

WeWork rents out co-working spaces to start-ups, freelancers and enterprises. To do that, it has large investments in real estate in very expensive markets which it pays off over time with rent and membership payments from companies and individuals. That real estate has long-term lease obligations of $17.9 billion, according to the filing.

Based on recent transactions in the private markets, the company is currently valued at about $47 billion, making it the most valuable start-up in the country.

In its filing, We Company reported a number of user satisfaction metrics that illustrate the value of its services. About 80% of members reported increased productivity since joining the community. Seventy-eight percent of enterprise customers said working with the company helped them attract and retain talent. A full 65% of start-ups and freelancers that joined WeWork believe it helped them accelerate their growth.

The company also revealed it had grown to 528 locations, up from 425 at the end of 2018, and can be found in 111 cities across 29 countries around the globe. We Company now boasts more than 527,000 customers, with 40% of those coming from enterprise members (organizations with more than 500 employees), double the level from early 2017. Additionally, more than 50% of its members are outside of the United States.

In recent months, a number of high-profile IPOs have gone public with dual class shares, as the founders seek to retain control of the companies they started even after they've gone public. We Company has taken that a step further.

We Company will have three classes of common stock. While the Class A shares offered to the investing public will have one vote per share, the Class B and Class C shares will have 20 votes per share. The multiple classes of stock are designed to consolidate voting power with founder and CEO Adam Neumann and certain key insiders.

Much is still unknown

Several other high-profile tech companies have made their debut this year, and the results since their IPOs have been mixed. Ridesharing giants Uber and Lyft have both fallen in the wake of their IPOs, currently down 18% and 30%, respectively, while Beyond Meat has soared more than 147%. This illustrates the stark reality that while investing in an IPO is risky at best, early bets on a company losing money when making its debut can go either way.

Things are still up in the air for WeWork's parent company as much has yet to be revealed. Hopefully, we will find out more closer to the reported September launch. Till then, let the buyer beware!