After a computer memory boom in 2017 and 2018, the market went bust in 2019. As is often the case in cyclical commodity industries -- and memory chips are a tech commodity -- manufacturers ramped up capital expenditures to increase production capacity when customers were clamoring for the components, which created an oversupply just before demand fell off a cliff.

There was an element of external bad luck to this bust as well. The U.S.-China trade war began in earnest about a year ago, and it took the tech market a bit by surprise. The demand destruction caused by the economic conflict has been greater than anticipated, exacerbating the downturn in the industry. In fact, the dropoff in global semiconductor sales in 2019 has been the worst since the 2008-09 Great Recession -- even as most developed economies are growing.

And yet, there are signs that the market may be bottoming, or at least nearing a bottom. A brief power outage at Toshiba Memory's main NAND flash factory in June disrupted its production for weeks, reducing supply and helping to slow price declines for the storage chips. Then, a dispute between Japan and South Korea raised concerns that the big Korean memory makers might be cut off from key materials, leading to future supply shocks. These elements lifted spot memory pricing, and have the potential to benefit non-Korean memory-makers such as Western Digital (NASDAQ:WDC) and Micron (NASDAQ:MU).

Speaking of these two memory and storage leaders, which of their stocks is the better buy today? 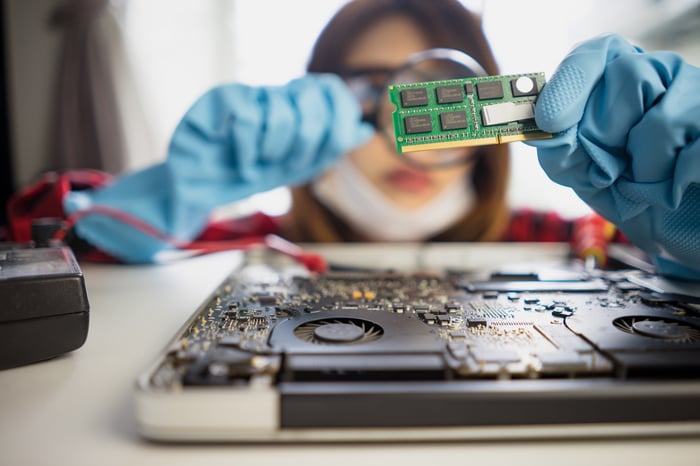 Are Micron and Western Digital poised for a turnaround? Image source: Getty Images.

The differences between Western Digital and Micron

While Micron and Western Digital have some product overlap, there are meaningful differences between their business models.

Western Digital is a diversified pure storage company, with a portfolio that includes older but cheaper hard disk drives (HDDs), and newer but more expensive NAND flash chips. Both are "non-volatile" data storage products -- in layman's terms, they retain the information stored on them even when they're disconnected from a power source.

Micron isn't in the HDD business, but it does produce NAND flash. However, NAND only accounted for 31% of its revenue last quarter. Another 64% came from DRAM memory chips. DRAM is volatile -- it doesn't store data when power is turned off -- but it's faster than NAND, which means it can speed up the flow of data in computers, servers, and phones.

Additionally, Micron and Intel (NASDAQ:INTC) partnered a few years ago to develop a third type of memory that isn't widely in use as yet: 3D Xpoint. It's non-volatile, like flash, but faster -- though not as fast as DRAM. 3D Xpoint is also pricier than flash.

What the NAND and DRAM markets are doing

NAND flash has been in a longer depression than DRAM, and the recent supply disruptions -- which temporarily hurt Western Digital's supply (Western Digital is a joint-venture partner with Toshiba Memory) – mostly affected NAND flash. But as Western Digital's management said in a recent press release: "We are seeing signs of improving conditions in the flash market and believe that it has reached a cyclical trough." That, however, doesn't mean that all is well. Most suppliers have seen their NAND flash profits fall to zero, and the coming rebound may be muted, given the caution on the part of customers due to the ongoing U.S.-China trade war.

Meanwhile, though DRAM spot prices experienced a temporary surge, contract prices are still expected to fall significantly in the current quarter, according to the website DrameXchange. However, DRAM chips had been much more profitable than NAND flash to begin with, and all three major DRAM producers, including Micron, are still posting profits (for now). The chart below reveals how Micron's exposure to DRAM has benefited its earnings per share (EPS) over the past year, as compared to Western Digital. 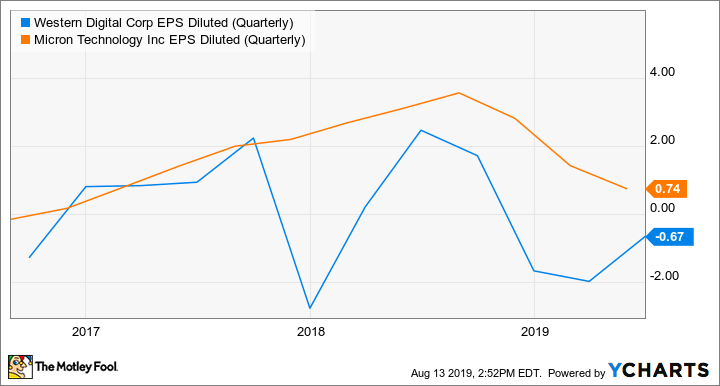 Micron has maintained profitability so far in this market downturn, while Western Digital has not. Though, at this point, Western Digital's EPS trend seems to be heading in a better direction.

It should be noted that memory price declines are somewhat normal over the long run. As demand for bits goes up, memory companies produce chips more and more efficiently, which lowers their costs. The trick is to have bit growth outpace price declines. However, the pricing crashes in both DRAM and flash have been worse than expected, and memory companies have not been able to sell enough bits to offset the drops in their average selling prices.

Maybe the memory bust is behind us (or maybe not)

Western Digital's comments aside, considerable uncertainty remains in both the NAND and DRAM markets. The U.S.-China trade conflict has flared up again recently after President Trump threatened to put 10% tariffs on another $300 billion of Chinese goods. In addition, his administration has delayed issuing special licenses that would allow U.S. businesses to sell to Huawei, a large Micron and Western Digital customer. However, Trump recently said he would delay imposing tariffs on some goods until December, news that led to a bit of a reprieve for trade-sensitive memory stocks.

Therefore, despite Western Digital's positive commentary, improving fundamentals, and the fact that it pays a nice 3.7% dividend, Micron might be the way to go, as it has a number of less "risky" elements:

While Western Digital's dividend might be enticing, I think Micron's ability to repurchase more shares in the downturn or, if necessary, decide to hoard cash, gives it an advantage. If nothing else, the $3 billion in net cash on Micron's balance puts it in a more comfortable position to ride out a trade storm than Western Digital, with its $7 billion-plus debt load. In addition, Micron stock is also a bit cheaper on a price-to-book basis.

Finally, with its exposure to both NAND flash and DRAM, along with the potential long-term upside of 3D Xpoint, Micron is more diversified. While that may be a disadvantage in the near term, as flash seems to be in better shape, having a wider variety of memory products should be a benefit over the long run.