Embraer (NYSE:ERJ) reported another quarterly loss on Wednesday morning, as it continues to prepare for the sale of a majority stake in its commercial jet business to Boeing (NYSE:BA). An unfavorable mix shift in its commercial aviation segment and separation costs related to the pending Boeing transaction weighed on its profitability for the quarter.

That said, the two main business segments that Embraer will keep going forward -- executive aviation and defense -- are becoming healthier. As a result, while Embraer stock is stuck in the doldrums right now, it could rebound in the years ahead, following the consummation of the Boeing deal.

Embraer's adjusted operating profit fell to $26.6 million last quarter, down from $106.9 million a year earlier. This led to a net loss of $0.08 per share. However, most of the company's profit decline came in the commercial aviation segment, which saw its operating margin fall from around 10% into low-single-digit territory.

Management explained that lower delivery volume and a greater number of E175 deliveries to U.S. regional airlines (which can typically negotiate bigger discounts) drove much of this margin erosion. Embraer also incurred $19.5 million of separation costs last quarter as it duplicates IT systems, reorganizes its employee ranks, and shifts production among its facilities to pave the way for Boeing to take an 80% stake in the commercial aviation business. Those costs depressed Embraer's commercial aviation operating margin by about 3 percentage points last quarter. Looking beyond commercial aviation, Embraer's executive jet business broke even last quarter, the defense business posted an operating margin of around negative 7%, and the services segment's operating margin reached 12%. (Part of the services segment will be included in the Boeing joint venture, but the parts related to defense and executive jets will stay with Embraer.)

The executive jet and defense segments are in better shape than the headline numbers suggest. Both businesses' profitability can swing wildly from quarter to quarter based on the timing of deliveries. Embraer reaffirmed its forecast that the "new Embraer" -- excluding the businesses that Boeing is buying -- will achieve an operating margin between 2% and 5% next year.

In a promising sign for the future of the new Embraer, the company's executive jet and defense businesses are poised for substantial growth in the years ahead. For one thing, order volumes exceeded deliveries for both segments last quarter. More broadly, both segments' new products are starting to gain traction in the market. 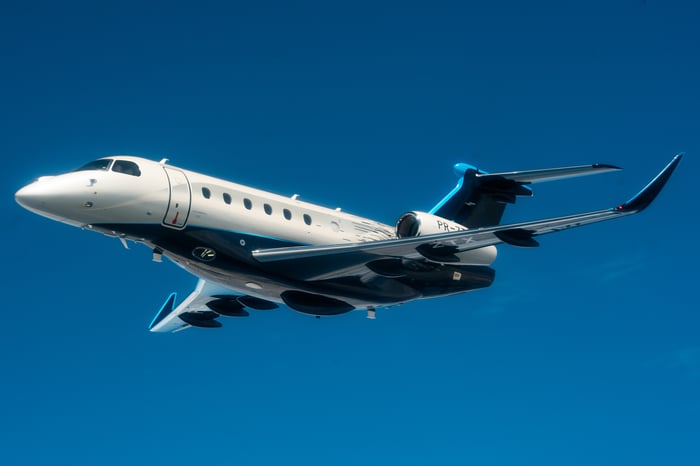 The executive aviation segment is banking on its new Praetor 500 and Praetor 600 midsize and super-midsize models to drive profitable growth. Embraer delivered the first Praetor 600 in late June, and the Praetor 500 was certified for service by regulators earlier this week. Both models have exceeded their design specifications, and early demand has been strong. Management noted that Embraer has sold more of its available executive jet delivery slots for the second half of the year than it had at this time in 2018.

Meanwhile, Embraer's defense segment received an order for five KC-390s from Portugal last month, its first firm export order for the multimission jet. Embraer is set to complete the first KC-390 delivery to the Brazilian Air Force later this quarter.

Embraer's executive aviation and defense segments aren't very profitable right now, but both have introduced innovative new products recently. This should drive future growth. Moreover, as these segments grow their revenue, they will have an easier time covering their overhead costs, which could drive margin expansion.

The great news for investors is that by buying Embraer stock right now, you essentially get those businesses for free. Embraer currently has a market cap of approximately $3.3 billion. It plans to pay out nearly half that amount -- $1.6 billion -- as a special dividend after the Boeing deal closes (probably just a few months from now). It will also continue to own a 20% stake in the commercial aviation business that could be worth as much as $1.5 billion.

That means the market is currently valuing the rest of Embraer at just a few hundred million dollars, significantly less than the $1 billion of net cash the company will hold after completing the Boeing transaction. Considering the revenue growth and margin expansion potential of the defense and executive aviation segments, Embraer stock seems like a compelling bargain today, despite the company's current losses.